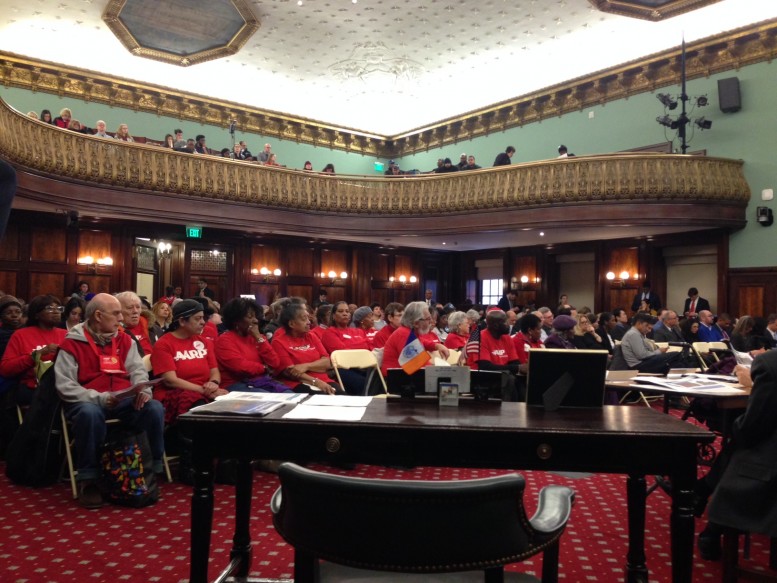 City Council hearing on Zoning for Quality and Affordability. photo by Rebecca Baird-Remba

The day-long hearing concerned Zoning for Quality and Affordability (ZQA), a collection of proposals that aim to make it easier and cheaper to develop affordable buildings. The new zoning would allow new buildings in mid- to high-density districts to go an extra five feet taller, which would enable taller, more retail-friendly ground floors. Affordable and senior developments could get height bumps of up to 20 feet, allowing developers to use up extra air rights or zoning bonuses that they’ve gotten for including below-market units.

Most council members supported the administration’s goals, but they took issue with the extra height for affordable projects. Contextually zoned neighborhoods across the city fought hard for their height limits and don’t plan to give them up without a fight. Since the public approval process for this policy began in September, nearly every community board in the city voted down ZQA, and then all five borough boards did too.

Williamsburg and Greenpoint have gotten the short end of the stick when it comes to zoning, after a dramatic upzoning in 2005 that produced dozens of luxury high rises and very little affordable housing. Council Member Stephen Levin, who represents North Williamsburg and Greenpoint, is well aware of how the 2005 rezoning reshaped his neighborhood and made it one of the city’s most expensive places to live.

“My concern is that ZQA will allow an incentive to tear down these rent-stabilized buildings [on Manhattan Avenue] and build new buildings [with the zoning envelope] allowed under ZQA,” the council member said during yesterday’s hearing. “My concern is that we’re going to displace affordable units in the process.”

“If ZQA had been in effect when Williamsburg and Greenpoint were rezoned, we believe we would see one third more affordable units than we got,”responded City Planning Director Carl Weisbrod. He claimed that the cost-cutting measures would have produced more than 300 affordable housing units in the neighborhood.

The other linchpin of ZQA is eliminating parking for new senior developments and affordable housing within half a mile of a subway stop. Nearly every council member at the hearing fought this part of the proposal, knowing that their car-owning constituents will be frustrated with any reduction in parking. Market-rate developments would keep the same parking minimums, and developers of mixed-income projects will be able to ask the city to waive parking spots for their affordable units.

Council Member David Greenfield, who chairs the council’s Land Use Committee, warned that developers of projects with only a few affordable apartments will try to get all their parking waived. But the Board of Standards and Appeals issues these parking waivers, and they typically take their cues from DCP.

Going forward, officials from City Planning and HPD will hash out a compromise with the council over the nitty-gritty details of ZQA. Several council members raised the possibility of additional oversight for parking waivers, which might mean that developers will need to go before community boards before they build senior or affordable housing without parking. Although Been and Weisbrod said they would consider it, we’re skeptical that they would create yet another hoop for developers to jump through in order to build. They want to make it easier, rather than harder, to get rid of expensive parking spots.

The City Council has two months to vote on ZQA and its sister policy, Mandatory Inclusionary Housing, which was discussed at a day-long hearing on Tuesday. After the City Council gives its stamp of approval, the two policies will officially become part of the city’s zoning and building codes.