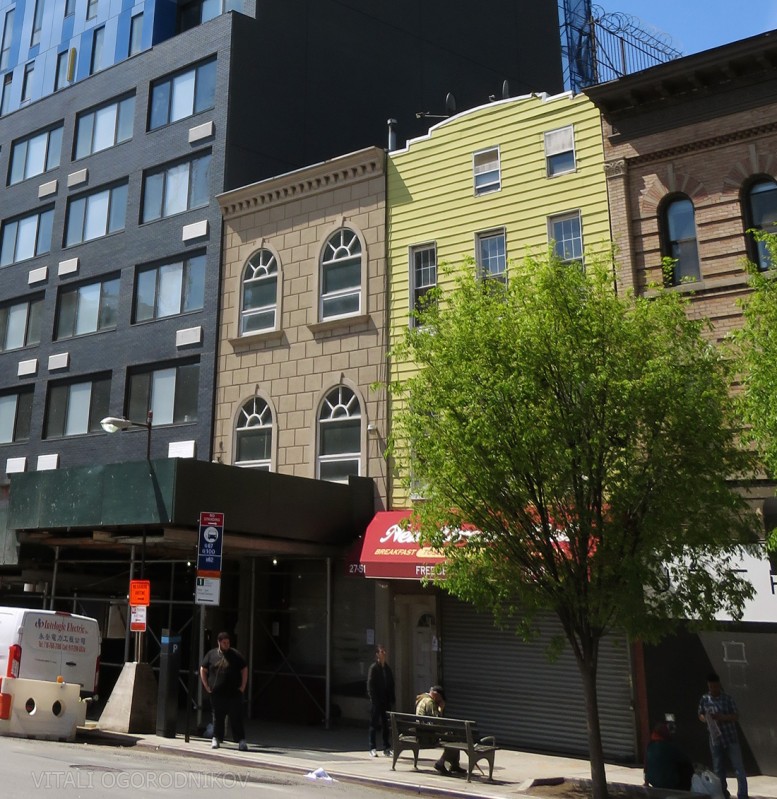 27-49 and 27-51 Jackson Avenue. Looking northwest. Photos by the author unless indicated otherwise. The project is the Lions Group’s fourth foray into the Queens Plaza/Court Square district. On the other end of the block, the site has been cleared for Jackson West at 27-01 Jackson Avenue, with Jackson East at 26-32 Jackson planned across the street. Foundations are underway at One Queens Plaza at 42-10 27th Street two blocks to the north. All four buildings, including the latest offering at 27-51 Jackson, are designed by Flushing-based architect Raymond Chan. However, building permits list architect John F. Capobianco as applicant of record and filing representative, leading us to assume that Chan is the design architect, while Capobianco is the architect of record.

The apartment building would rise next door to the 19-story, 176-room Aloft Hotel, which topped out in December 2015, and is currently nearing exterior completion. Evidently, Gene Kaufman, the hotel’s architect, anticipated next-door development when he left the hotel’s lot walls completely windowless. The new apartment tower, 146-feet-high per construction permits, would probably rise roughly around the level of the hotel’s highest Jackson Avenue-facing setback. The 4,000-square-foot, mid-block lot measures 40 feet along Jackson and stretches 100 feet deep. It is occupied by two rowhomes, which, until recently, housed commercial space at ground level with residences above. Demolition permits list the three-story buildings as 40-feet-high. The two follow the street cornice line and add a splash of color to the block, but are ultimately too kitschy for any preservation concerns. 27-49 Jackson, with its arched windows and beige facade with a faux-brick pattern, is a Postmodern imitation of the traditional rowhome. A psychic was the last tenant to occupy the ground floor space. Its neighbor at 27-51 Jackson is clad in bright yellow vinyl siding of the type more common seen in Williamsburg than Long Island City, with the New Dream Deli at the ground floor. We hope that the future tenant of the retail space would be as useful to the residential community as the deli that it replaces.

Demolition permits were filed at the end of December 2015. Our site visit found both ground level businesses shuttered. Barring unforeseen delays, we expect demolition scaffolds to go up in the near future.

The new proposal follows Raymond Chan’s established Long Island City paradigm, which is characterized by grids of floor-to-ceiling windows, rows of glass-balustrade balconies, and subtle setbacks near the pinnacle. The front facade would be set back from the sidewalk by two feet, putting it roughly in line with the depth of Aloft Hotel’s mid-section. The 133-foot-high curtain wall would be accented with 20 balconies on floors three through 12. A terrace would front the penthouse level. The facade would be clad in silver metal panels, with a darker portion in the southeast corner in the building’s upper portion. The proposed building would cover 70 percent of the site, leaving space for a 30-foot yard in the rear.

The mostly blank lot wall of the east facade overlooks the three-story corner building at 27-55 Jackson, which serves as an office of Uber’s New York division. The pre-war structure, with its ornamented brick facade, arched windows, and prominent cornice, is the most distinguished building on the block, and adds much-needed historical character to this stretch of Jackson Avenue. It is entirely possible that the building would be the next victim of the construction boom. If that happens, we hope that the builder would follow in the footsteps of Greystone Property Development, which is planning a 22-story tower that would rise from the existing pre-war building at the site. 27-51 Jackson would face its low-rise neighbor with a mostly blank wall, accented by two rows of narrow windows. The future site of the tower, with Aloft Hotel on the left and Tower 28 on the right

Unless the owners of the Uber building have sold the entirety of their air rights, redevelopment at the site seems all but inevitable. After all, the roughly 122,000-square-foot block, bisected by the elevated Queensboro Bridge Viaduct, is probably the city’s single hottest development parcel, with six projects underway. The 46,500-square-foot low-rise at 27-35 Jackson Avenue on the other side of the Aloft Hotel is slated to become Court Square’s first major shopping center. On the western end of the block, across the viaduct, lies the site of Lions Group’s Jackson West at 27-01 Jackson Avenue, as mentioned earlier. Jackson West’s neighbor to the north is the Hyatt Place at 27-07 43rd Avenue, where the final, ninth floor being assembled at the moment. On the other side of the viaduct, across from the hotel, foundations are underway for the eight-story residential project at 42-83 Hunter Street, a “pencil tower” similar in size and purpose to The Madison LLC at 42-77 Hunter, which was completed less than two years ago a few doors down. Of course, dozens of other projects are rising on the adjacent block as the neighborhood is undergoing one of the largest building booms in recent memory. Like the rest of the ongoing projects in the vicinity, 27-51 Jackson benefits from proximity to the E, F, G, M, N, Q, R, and 7 trains, which put Midtown Manhattan, northern Brooklyn, and Queens neighborhoods such as Astoria, Sunnyside, and Woodside within a  seven-10 minute train ride. The area is also very well-served by buses, with a particularly high concentration along the two blocks to the east. Jackson Avenue itself is the access point for Queens and Northern boulevards, as well as the Ed Koch Queensboro and the Pulaski bridges, which lead to Manhattan and Brooklyn respectively. Such driving convenience comes at the cost of bumper-to-bumper rush hour traffic outside of the future building’s windows, although the effect would be softened by the tree-lined median.

Though the building’s balconies face in the opposite direction from the Manhattan skyline, residents would still have front row seats to the epic skyscraper spectacle. The massive, three-tower, 1,789-unit complex at 28-10 Jackson by Tishman Speyer and H&R Real Estate Investment Trust is underway one block west. Rockrose’s 783-unit project at 43-22 Queens Street is two blocks east, where a 54-story tower would rise from the historic Eagle Electric facility. A 35-40-story tower at 43-15 Queens Street is rumored to go up at the block in between, opposite from 27-51 Jackson, developed by BLDG Management. Development awaits the large, empty lot across 42nd Road to the east, where two new towers serve as the expanded Gotham Center office complex.

The one amenity the neighborhood is sorely lacking is green space. While a number of green plazas from Court Square to the west to Dutch Kills Green to the east dot the adjacent blocks, they would be insufficient for the tens of thousands of residents set to move into the neighborhood in the coming years. We would like to remind the readers of our recent call to convert a largely-redundant stretch of Hunter Street into pedestrian space. In addition, the empty, city-owned dirt lot by the viaduct, half a block west of 27-51 Jackson, would serve the neighborhood better as a public space.