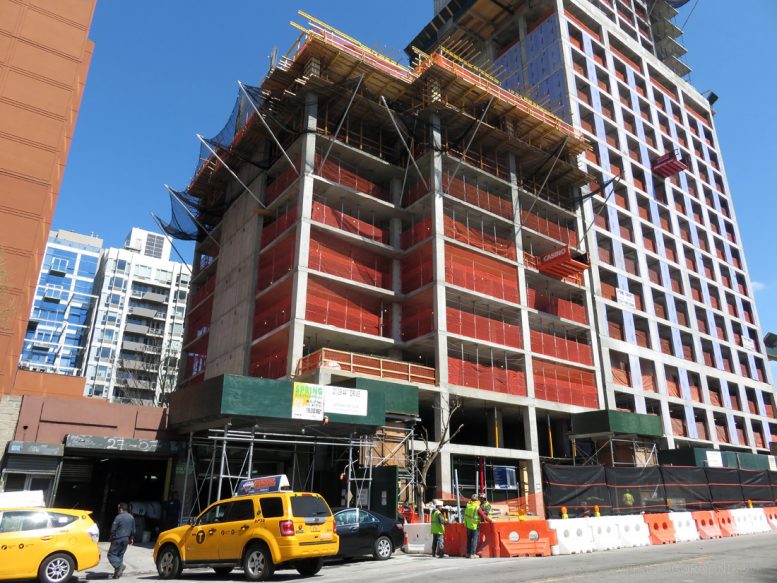 Watermark Court Square, the 27-story luxury rental building at 27-19 44th Drive in Long Island City, has risen past its tenth floor, about a third of the way to its final 282-foot height. The LEED-certified building is developed by Twining Properties, with The Ashforth Company as an investment partner. TG Nickel & Associates is the general contractor for the project, which Handel Architects designed as a slender stack of floor-to-ceiling windows set within a grid of grey and dark brown brick. Completion is expected in 2017. The project takes up the entirety of its 17,067-square-foot, mid-block lot, leaving no provision for open ground space. The tower itself sits on the western end of the site facing 44th Drive, where its 75-foot-wide frontage would open into the residential lobby and adjacent retail space. The rear of the through-block lot opens onto Purves Street, a quiet, block-long cul-de-sac that welcomed some of Court Square’s first residential high-rises less than a decade ago. This portion of the site is still occupied by the remaining portion of the original structure that once stretched from street to street. Standing one story high on 44th Drive and two stories on Purves (which runs at a slightly lower elevation), the building was most recently occupied by Queens Plaza Automotive Warehouse, one of the dozens auto shops that until recently lined most local blocks. Permits to demolish the 44th Drive portion of the building were filed on 11/5/2014 and 11/7/2014. Demolition wrapped up by late 2015. We do not know whether the remaining part will be torn down at a later time or incorporated into the project. The most recent renderings indicate a one- or two-story podium at the site, which could either be the existing structure or new construction. The north façade as seen from Jackson Avenue Building permits place the total construction area at 151,021 square feet, while Ashforth Company and Twining Properties building pages round the figure down to 151,000 and 150,000 square feet respectively. Of these, permits allocate 122,847 square feet for residential and 2,756 retail space. Presumably, some of the remaining footage would be taken up by amenities, which include a sky lounge, a work lounge with private meeting space, a garden, café, and fitness center. The rooftop terrace continues the ongoing – and admirable – trend of creating accessible space at building pinnacles. These amenities are in step with the now-expected package from any luxury rental that seeks to attract young professionals. The Twining Properties page calls the Watermark “an attractive and competitive option and appealing choice for Gen Y professionals,” while The Ashforth Company describes the units as “configured for single-professionals, shares, and professional couples.” This marketing strategy is not surprising given the neighborhood’s incredible transportation convenience, where the E, F, G, M, N, Q, R, and 7 trains place Midtown Manhattan, northern Brooklyn, and the nearby Astoria, Sunnyside, and Woodside neighborhoods within a seven-10 minute train ride. Given that the nearest entrance to the Court Square station complex is 560 feet away from the future building’s front door, its residents would have a shorter commute to Midtown East than many of their counterparts in Lower Manhattan or the Upper East and West sides. On the other hand, the building’s prime location on 44th Drive also translates to persistent rush-hour traffic. Jackson Avenue, Long Island City’s principal thoroughfare, marks the block’s northern boundary. To the south, Thomson Avenue serves as the only pedestrian and traffic connector across the 3,600-foot stretch of Sunnyside Railyards between Queens Boulevard and 49th Avenue.

Four-hundred-square-foot studios make up 40 percent of the building’s 168 rental units, available for around $2,100 per month. One-bedroom, one-bathroom units make up another 40 percent, ranging in size from 600 to 820 square feet and going for around $2,500 per month. The remaining 20 percent are allocated for two-bedroom, two-bath units sized from 950 to 1,100 square feet and priced around $3,300  per month. These prices are listed as per Pearson figures, as quoted by The Long Island City Post. The rising tower is part of a dense cluster that rises from arguably the hottest development block in one of the New York’s fastest-growing neighborhoods. Just a few years ago, the trapezoidal block bound by Purves Street, 44th Drive, and Jackson and Thomson avenues was home to auto shops, warehouses, overgrown surface lots, and a handful of rowhomes. In 2014, the 14-story 26-14 Jackson brought 98 units to the block. Now, 27-19 44th Drive, along with 27-21 44th Drive, 33-story 44-26 Purves Street, and seven-story 44-46 Purves would add 168, 120, 270, and 49 units respectively. The combined 705 apartments in five independent projects would make the block a rival to some of its most densely-built counterparts in Manhattan. Since the Watermark lags around a dozen stories behind at 27-21 44th Drive and 44-26 Purves, completion is expected around roughly the same time frame. But even if the building’s doors would open after those of its counterparts, it would only help its residents, who would arrive at a mostly-built-out block with active pedestrian presence. 44-26 Purves Street and The Edison at 27-21 44th Drive rise to the left. The Haylon at 43-25 Hunter Street is under construction to the right. One Court Square is in the center.

The last major addition to the block may eventually come to the lot at the corner of 44th Drive and Jackson Avenue, immediately north of the Watermark. There is no evidence of such development planned at the moment. The latest permits at 26-04 Jackson date all the way back to 2003, calling for minor renovations at the low-rise properties. However, massing renderings posted at the Ashforth website show a roughly 15-story building suggested for the corner lot. The design of the Watermark itself also appears to anticipate such development. The tower’s north facade faces the adjacent low-rises with the service core, entirely windowless at the lower dozen or so floors. Windows wrap around the corners on the floors above, while two bays of narrow apertures flank the core. 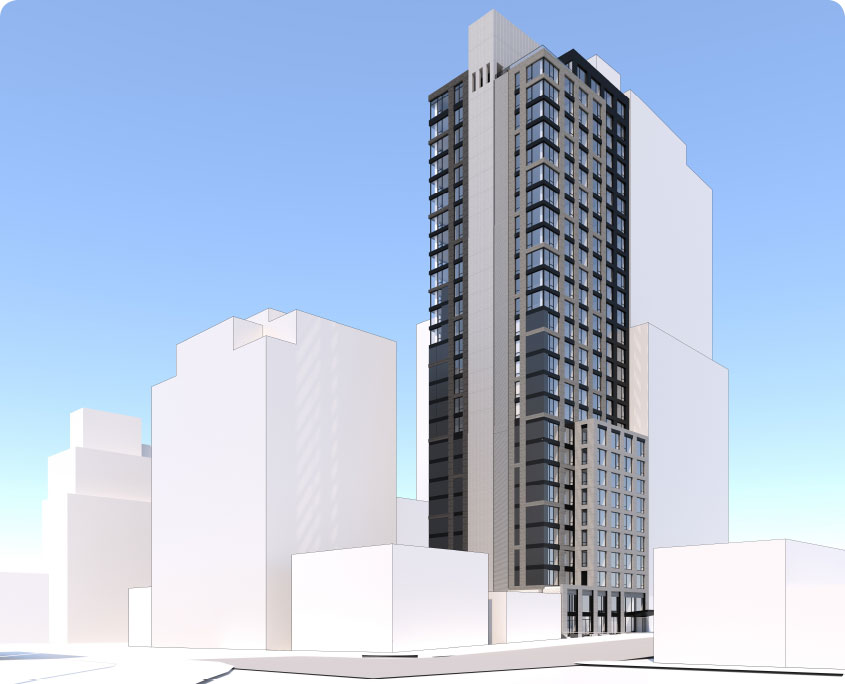 The north façade as seen from Jackson Avenue

These northern windows would open upon the impressive green glass slabs of One Court Square and 43-25 Hunter Street, with glimpses of the Midtown skyline visible beyond. However, the best vistas would open from the west facade. The building sits across a low-rise block to the west, which faces the Queens County Courthouse and Court Square Park. Residents would be treated to the expanse of southern Long Island City, with seemingly endless Brooklyn blocks marching towards the southern horizon. To the southwest, the growing pinnacles of Downtown Brooklyn square off against the man-made mountains of Lower Manhattan off the East River. To the west, the towers of Midtown South blend with the growing skyline of Hunters Point South. The towers at Hunters Point line the ever-expanding public waterfront promenade, which lies less than a mile away. Closer public points of interest include the Queens Public Library, which sits one block west at 45th Avenue, the MoMA PS1 Museum a few blocks west, and an ever-expanding inventory of restaurants and retail that fill the ground floors of many of the new projects that continue to transform the neighborhood.