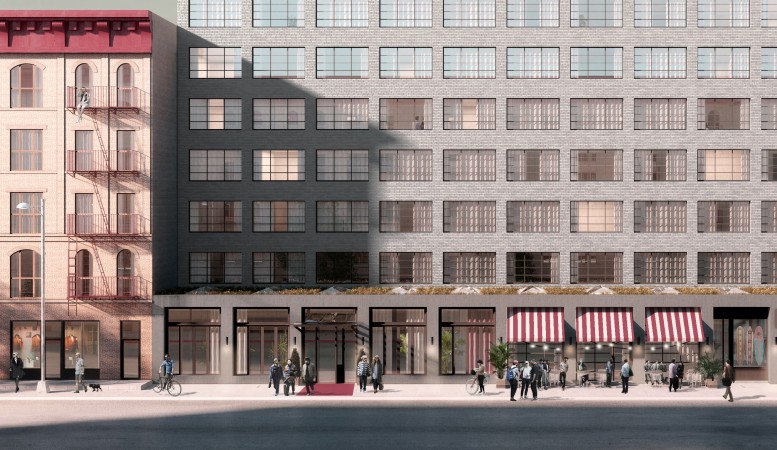 An upscale 11-story dorm may replace a factory at 292 North 8th Street, near the BQE in Williamsburg.

Reps for the developer tell us there will be 400 beds (two per room), lounges, a fitness center, study rooms, meeting/event spaces, and a communal kitchen. All the bedrooms will come with kitchenettes and custom furniture. The developer, Macro Sea, hopes to create an upscale dorm, rather than more of the cheap finishes and industrial furniture most undergrads are used to. Fast Company profiled the project earlier this week and compared it to WeWork’s WeLive, which combines small living spaces with modular furniture and large common areas.

The dorm rooms would begin on the second floor, with 12 units, and the third through 10th floors would host 21 to 26 rooms apiece. Amenity spaces, as well as a roof deck, would fill the top floor. Photo of a model dorm bedroom via Macro Sea

Retail, administrative offices, a multipurpose room, and a lobby would occupy the ground floor. The first-floor commercial space would span roughly 2,300 square feet, and hopefully it will bring some activity to this relatively sleepy block in North Williamsburg.

The cellar levels would include a laundry room, storage, and a 34-car garage.

Macro Sea is launching a new subsidiary that will run five connected dorms under the same brand in New York and Europe. Construction is already underway on the next building in Barcelona, which will open in two years. The firm hopes to construct dorms in Paris and Rome in the next five years. All five dorms will be linked through an app, which will allow students to request rooms in the company’s other buildings. The app will also control room access, maintenance requests, and laundry.

It’s worth noting that that city zoning would not allow the developer to build this large if it were a traditional apartment building. Since it’s a dorm, it falls into the category of “community facility.” Community facilities include medical offices, religious uses, dorms, and any kind of supportive housing, like a homeless shelter. The zoning also gives these uses a floor area boost, and in this case, the project is about 20,000 square feet larger than any residential building that could be constructed on this lot.

Macro Sea appears to be co-developing the building with Kamali Organization (who are listed on the deeds). Kamali paid $20,660,000 for the property, which includes three separate lots and encompasses 20,500 square feet.

Stonehill and Taylor Architects applied for the permits, but Macro Sea will handle the design.

Work on the Williamsburg dorm is expected to start early next year.