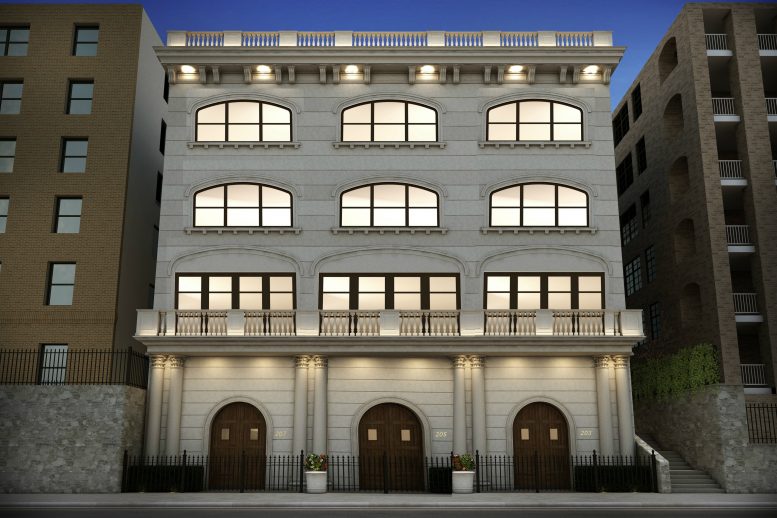 New construction rarely arrives in Hudson Heights, the idyllic, northwestern section of Washington Heights that borders Fort Tryon Park and Inwood. But today, YIMBY has a look at three attached townhouses headed for 203-207 Cabrini Boulevard, on a lot overlooking the Hudson River and Fort Washington Park. The four-story townhouses will share a “limestone-like” facade, with large casement windows and Neo-Grec-style accents. Every house will have a private backyard, roof deck and balcony, and they’ll be equipped with “smart home automation,” radiant heating, elevators, and floor-to-ceiling windows on the east facade. There won’t be any parking, but owners could park in the commercial lot at the Castle Village co-op across the street.

These will be some of the most expensive homes in the neighborhood. The only other house we could find in this price range was the two-family “Pumpkin House,” an unusual 3,150-square-foot building situated on a cliff up the block that’s going for $5,250,000. The price per square foot – $1,200 – for the Cabrini Boulevard houses is also higher than most apartments in the hood.

The design is interesting but rather gaudy for the neighborhood, which is mostly populated by mid-rise, pre-war co-op buildings clad in brick. Rendering of the roof deck for the Cabrini Boulevard townhouses, via Nest Seekers