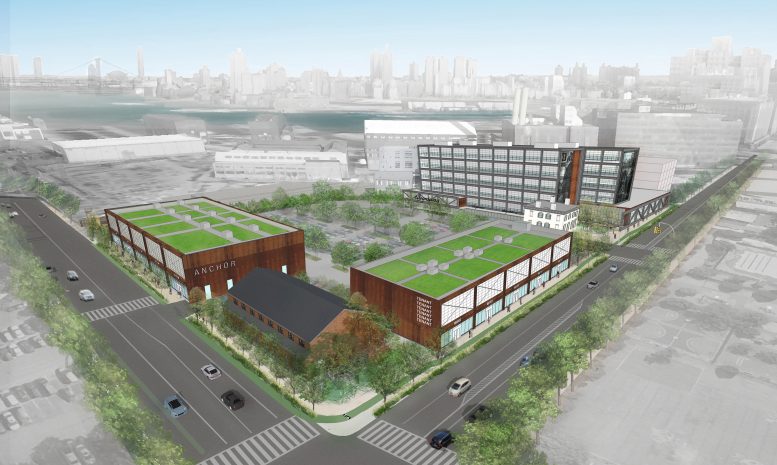 It was revealed in May of 2015 that New Jersey-based Steiner Equities Group, selected by the Brooklyn Navy Yard Development Corporation, would be redeveloping the corner of Flushing Avenue and Navy Street into a multi-building commercial complex. Now, the developer has filed applications for three of the four planned buildings. At the corner of Flushing and Navy, filed under 1 Flushing Avenue, a new single-story, 12,600-square-foot retail building is planned. Directly to the east, at 3 Flushing Avenue, a two-story, 36,645-square-foot retail building is in the works. To the north of 1 Flushing Avenue along Navy Street, at 25 Navy Street, another two-story retail building measuring 41,200 square feet is planned. A fourth building, this one five stories in height, is planned at 21 Flushing Avenue. That structure, to total 248,489 square feet, will include a 74,000-square-foot Wegmans market and 126,000 square feet of industrial space. S9 Architecture is the design architect. Steiner is ground-leasing the property in a 96-year lease, which is currently scattered with the crumbling remains of Admiral’s Row. Two of the dilapidated buildings along the corridor are being restored, but the rest are to be demolished. Completion is expected in 2017.