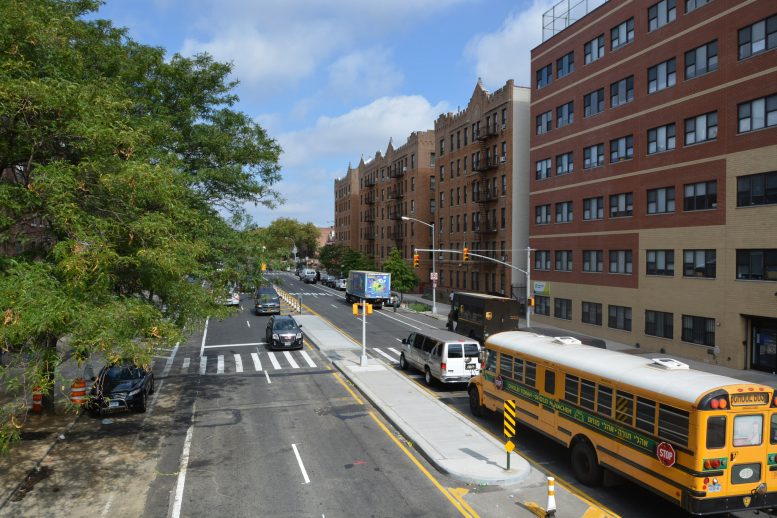 Rockaway Avenue in Brownsville, photo by NYC DOT via Flickr

As the dust settles after a contentious rezoning in East New York, Brooklyn, the city’s Department of Housing Preservation and Development has set its sights on Brownsville, a neglected and similarly working class neighborhood next door. The housing agency announced the start of a new “neighborhood planning process,” which will collect feedback from residents, organizations, and business owners on how the city could improve the area.

Brownsville is known for having the city’s highest concentration of public housing, soaring crime rates, and some of the deepest poverty. More than a third of households there live below the federal poverty line, which is set at $11,880 for a single person and $20,160 for a family of three. Residents have good reason to be skeptical of city initiatives, but the area is long overdue for better retail, safer streets, and newer housing.

Anyone who’s had a front row seat to a rezoning under Mayor Bill de Blasio will feel a little deja vu at the words “neighborhood planning process.” During the early stages of a rezoning, the Department of City Planning typically holds “community visioning sessions” and town halls, similar to what HPD is describing. But this process, HPD claims, is not a precursor to new zoning.

“There are no future rezonings planned for Brownsville,” an HPD spokeswoman told us last week. “This is not a pre-empt to something else. HPD is announcing that we are available and you can talk to us, tell us what’s happening here.”

Employees from the agency have begun attending community meetings and events, like NYCHA family days, to reach out to regular folks in Brownsville. Next, they’ll hold a series of public workshops, where Brownsville residents can attend and tell city agencies where they’d like to see better housing, amenities, or neighborhood services. Several other agencies will participate, including the Parks Department, NYCHA, NYPD, and the Department of Transportation.

HPD has also set up a landing page for the process on a new planning platform called coUrbanize. Anyone can log in and pin points on a map of the neighborhood to indicate where new housing, a better park, or a cultural center could grow. If people can’t make it to meetings organized by the city, they’ll still be able to offer their feedback using the map or by taking surveys on the site.

The first of HPD’s meetings will take place this evening at 6:30 p.m. at P.S./I.S. 323 Oasis Beacon Center, located at 210 Chester Street in Brownsville.