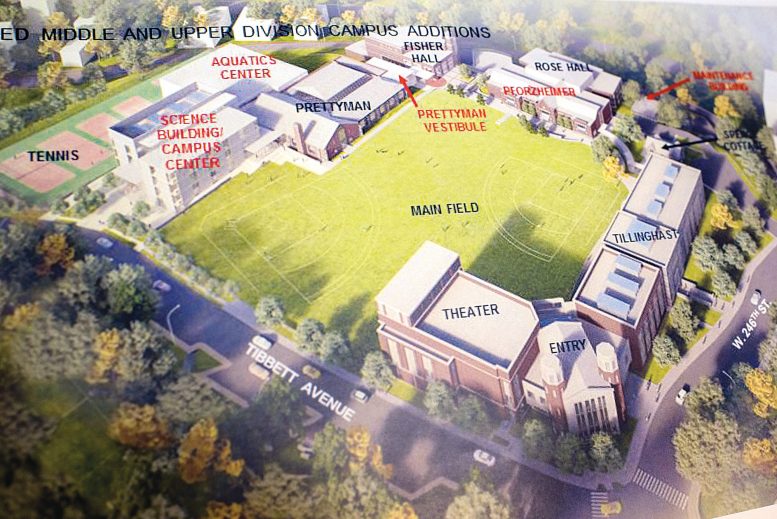 The plan for Horace Mann's expansion. photo via Riverdale Press

The tony, private Horace Mann School in the upper Bronx has filed plans with the Department of Buildings to expand their campus with a new pool and science center.

The three-story building would rise at 4652 Tibbetts Avenue, on the northwestern corner of Horace Mann’s property. Although the building would only be three stories, the plans say (possibly incorrectly) that it would reach 160 feet into the air. The filing calls for a 56,596-square-foot complex with classrooms on each floor and a pool on the first and second stories.

The structure will include a 26,000-square-foot aquatic center with a spectator area and gym, the Riverdale Press reported in January. It’ll be attached to the school’s old Prettyman Gym, which dates back to 1924 and has a pool. The school also plans to renovate the old gym and convert the pool into a fitness area, according to the paper.

The academic section of the project will be a separate building. The first floor will serve as a “campus center” with a large open space for assemblies and social activities (listed on plans as a “great room”), and the upper floors will have science labs, meeting space, offices, and classrooms.

Since this area is zoned for one- and two-family homes, the school did get approval from the local community board and may need a variance from the Board of Standards and Appeals.

Horace Mann is not the only school that’s expanding in this upscale Bronx neighborhood. Just up the block, the Riverdale Country School is working on three big construction projects, including a $25 million natatorium with a six-lane pool.

Permits Filed for 6201 Broadway in Fieldston, The Bronx

Permits Filed for 5278 Post Road in Fieldston, The Bronx

Permits Filed for 3588 and 3592 Greystone Avenue, Fieldston, The Bronx