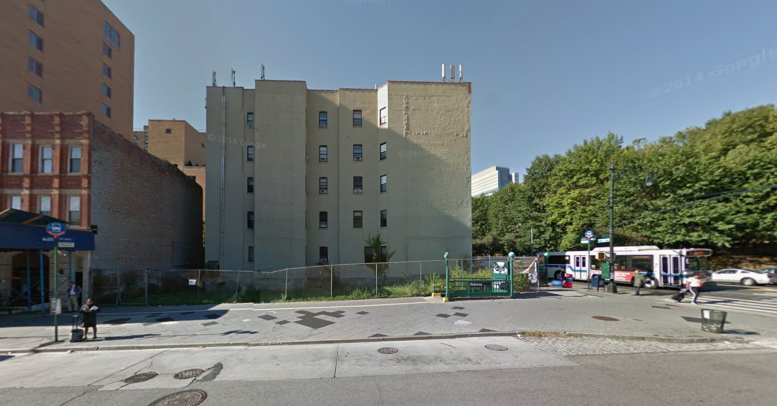 Central Harlem is soon going to have one fewer vacant lot. Developer Rafael Santandreu hopes to build a nine-story, mixed-use building at the corner of 135th Street and St. Nicholas Avenue, next to the 135th Street stop on the B and C trains.

The 93-foot-tall development would rise across the street from St. Nicholas Park. Plans filed on Wednesday call for 17 apartments, stacked on top of 2,300 square feet of retail. Those 17 units would be spread across 14,443 square feet of residential space, yielding average, rental-sized units of 850 square feet. Each of the upper floors would hold two or three apartments, and the cellar would include bike storage.

Anthony Crusor’s AQC Architect, which is based nearby on 138th Street, will handle the design. Developer Rafael Santandreu shares a business address with the architects.

The project may be some kind of affordable housing, because Santandreu’s LLC purchased the 2,400-square-foot lot from the city last year for one dollar. Before that, the Greater Harlem Housing Development Corporation had owned the lot for 21 years, and turned it back over to the city in 2015.

The landmarked Strivers Row townhouses sit three blocks away on 138th and 139th Streets, and a beautiful old school fills most of a block across the street. We hope the new building will respect this neighborhood’s historic architecture and improve upon the lackluster developments that have gone up in recent years. Strivers’ Gardens, a 12-story condo complex, was finished across the street in 2005. The units look decent, but the building’s tan facade and PTAC units leave a lot to be desired.