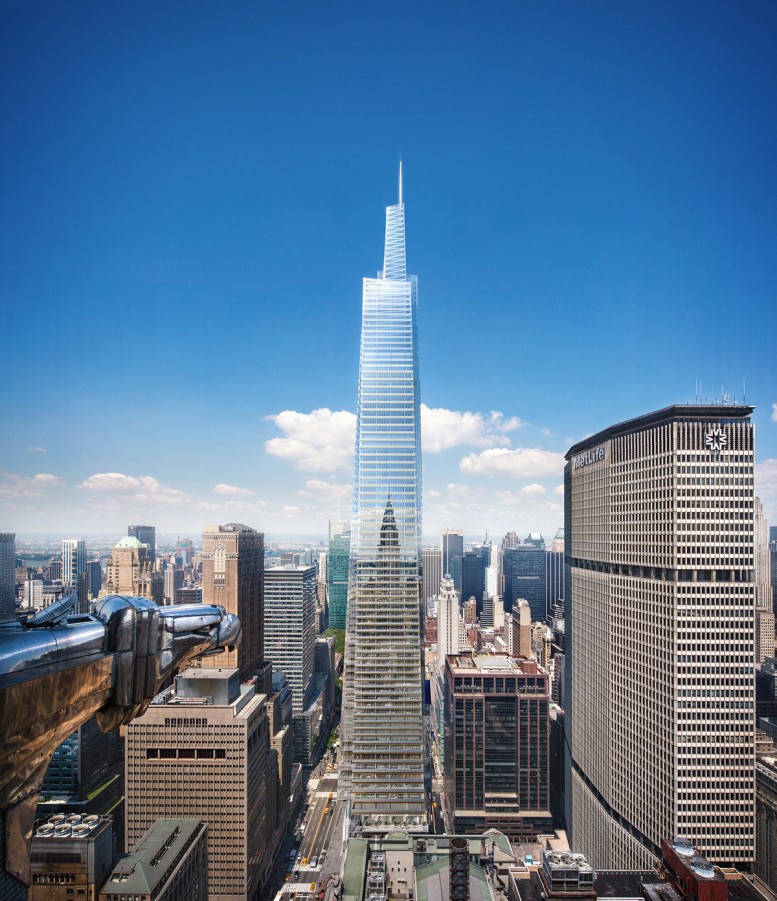 The new zoning for Midtown East has been years in the making. The neighborhood’s City Council member, Dan Garodnick, shot down a rezoning plan for the area in 2013. When Mayor Bill de Blasio took office in 2014, his administration pulled together a steering committee chaired by Garodnick and Manhattan Borough President Gale Brewer. They added several key provisions to the 2013 zoning, many of which made their way into the plan posted this week on the Department of City Planning’s website (hat tip to Crain’s.) Midtown East has 70 million square feet of office space and 475 buildings, more than 300 of which are over 50 years old. The average age of office buildings in the neighborhood is 75 years, according to DCP. Officials hope that the upzoning will generate several new office towers, which will offer modern amenities and features that many companies look for in a work space. Those include column free space, large windows, and tall floor-to-ceiling heights, along with outdoor space and attractive ground floor retail options.  Without a major boost in office construction, tech, advertising, and media companies will keep elsewhere for offices—to the outer boroughs, the Meatpacking District, NoMad, or outside of New York City entirely.

The plan will allow developers to build substantially bigger and taller than before, boosting the allowed floor area ratio (density) from 12 on the side streets and 15 around Grand Central Terminal to between 18 and 27. The densest development will be allowed around Grand Central, the 5th Avenue-53rd Street subway station, and the Lexington Avenue-51st Street subway station. In exchange for the right to build 30 percent larger in these areas, which the city calls Transit Improvement Zones, developers would have to fund improvements to local transportation infrastructure.

If the developer is still looking for a floor area boost after factoring in the bonus for transit improvements, they can purchase air rights from a landmarked building anywhere in the new Midtown East district. Builders who take advantage of landmark air rights and aren’t building transit improvements must pay into a “public realm improvement fund.” That money would go toward improving the hood’s streets and public open space.

And new zoning is definitely aimed at commercial development. No more than 20 percent of a new building can be devoted to residential space.

Developers would also no longer have to worry about one odd relic of the 1961 zoning. Under the city’s current rules, office buildings that are larger than modern zoning allows can only be redeveloped if 25 percent of the original building is preserved. The owners of 390 Madison Avenue are doing an elaborate and expensive rebuild of the 1950s office building where they are partially demolishing and “re-massing” the old structure in order to follow the city’s Byzantine zoning rule. The new zoning will finally scrap the 25 percent requirement.

The city predicts that the upzoning will generate 6.6 million square feet of additional office space, 119 apartments, and an extra 150,000 square feet of retail across 16 development sites.

The Midtown East rezoning still has to make its way through the six-month-long public approval process, which involves approvals from the local community board, the Borough President, the City Planning Commission, and the City Council.

The Department of City Planning will present the proposal to Manhattan Community Board 5 next Wednesday, August 31 at 6:30 p.m. at 7 East 15th Street. The agency will also host public scoping meetings to lay out the plan and answer questions at 2 and 6 p.m. on Thursday, September 22, at 1 Centre Street.