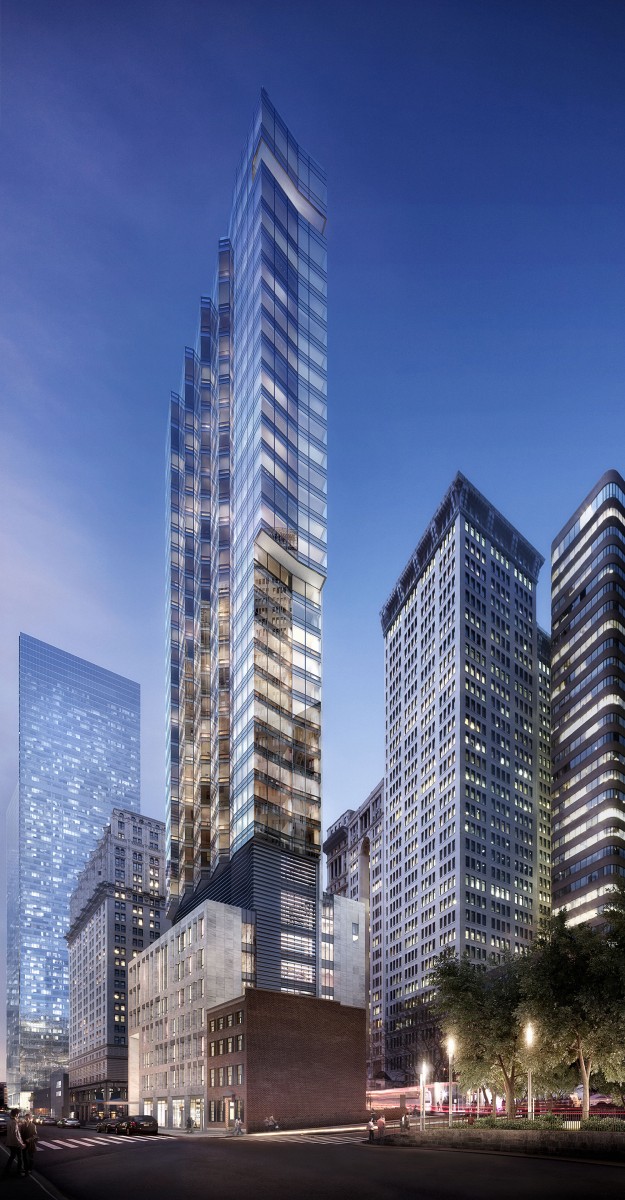 Rendering of the proposed tower at 77 Greenwich Street.

After years of planning and months of Landmarks approvals, a 500-foot-tall tower is one step closer to reality at 42 Trinity Place. New building applications were filed over the weekend to erect the 40-story building, which will be formally known as 77 Greenwich Street.

The 280,700-square-foot development will bring a new elementary school, condos, and retail to the site of a shuttered Syms clothing store between Edgar and Rector Streets in the Financial District. The 476-seat, pre-K through fifth grade school will fill the first eight floors. A 4,800-square-foot retail space will also occupy part of the ground floor, along with lobbies for the school and the apartments. 28 stories of apartments will follow, then two floors of amenities, and two stories of mechanicals.

Ultimately, building’s 162,127 square feet of residential space will hold just 90 condos, for an average apartment measuring 1,800 square feet. Roughly 56,000 square feet of the property’s base will be devoted to the school.

The plans detail a host of luxury amenities, including a gym, three shared roof decks, a children’s play area, a lounge with a kitchen, and a dog spa.

The school will occupy the landmarked Dickey House next door, and the tower will cantilever over the four-story, 1910 townhouse. In March, the Landmarks Preservation Commission greenlighted plans for both the cantilever and the renovation of Dickey House. After the School Construction Authority renovates the Federal style structure, it will host a roof deck play area for students on its fourth story.

FXFowle is designing 77 Greenwich Street, and the developer is Trinity Place Holdings, headed by former Forest City executive Matthew Messinger. The Post speculated that apartments will be be priced somewhere between $2,000 and $3,000 a square foot, and construction is expected to finish in 2019.