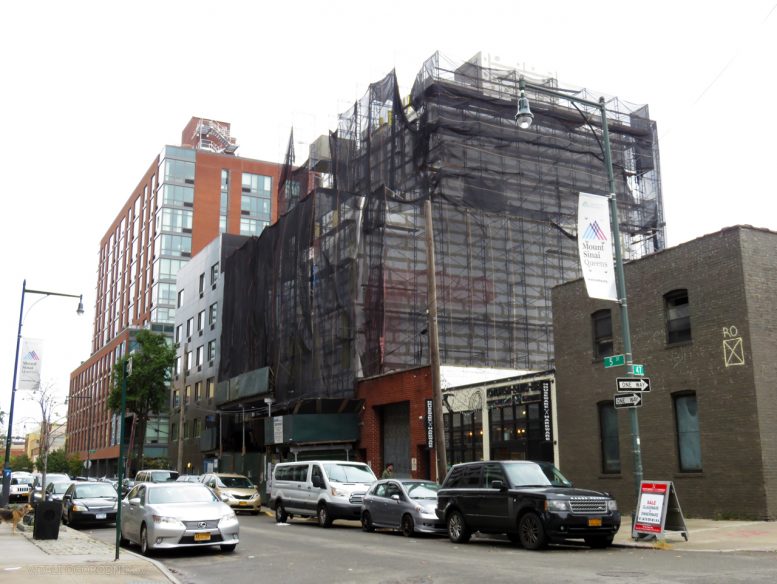 The 5,000-square-foot, mid-block site was originally occupied by a two-story commercial facility. A high-ceiling garage and warehouse space sat within the ground floor, with offices located above. The design by Bluarch Architecture will transform the brick-faced warehouse beyond recognition. The roughly 20-foot-tall ceiling of the former garage will make a lofty space for ground-level retail, measuring 3,832 square feet according to the permits. The extension nearly doubles the height of the original 30-foot-tall structure, bringing it 70 feet to the roof line, with approximately 10 additional feet to the top of the bulkhead. Narrow vertical windows would be staggered dynamically across the white facade, which is interrupted with a terrace setback above the third floor.

The new building sits across the street from the glassy, 30-story 4705 Center Boulevard, built in 2008. It is part of the Hunters Point waterfront development that wrapped up construction just two years ago, creating a dramatic riverfront skyline that faces Midtown. Its block-wide, seven-story podium consists of a multi-story garage atop ground-floor retail that includes a supermarket, a pharmacy, and a restaurant. The podium is topped by an approximately 35,000-square-foot green roof.

The roof level of 47-09 5th Street would sit just slightly above its neighbor’s massive podium. The new building’s rooftop terrace would open towards a sweeping view of the adjacent elevated green space, with the Midtown South skyline partially visible to the west. The new building features no parking, as is permitted by the special Long Island City zoning. In tandem with a series of mid- and high-rise buildings down the street, 47-09 5th Street serves as a transition piece, mediating between the large scale of the waterfront towers and the low-slung, traditional neighborhood that stretches inland. Vernon Avenue, the neighborhood’s primary retail and nightlife corridor, runs one block east. It is anchored by the Vernon Blvd-Jackson Av station of the 7 train, which puts Grand Central Terminal within a single-station ride. The 21st St-Van Alst stop of the G train sits a block further on Jackson Avenue.

Gantry Plaza State Park, which fronts the East River, sits about 500 feet to the west. There, a block away from 47-09 5th Street, rises the concrete shell of the Hunters Point Library, which is under construction. The rectangular building, designed by architect Steven Holl, addresses the neighborhood and the river promenade with a series of dramatic, curvy cutaways, which will add an iconic presence to the borough’s primary waterfront.