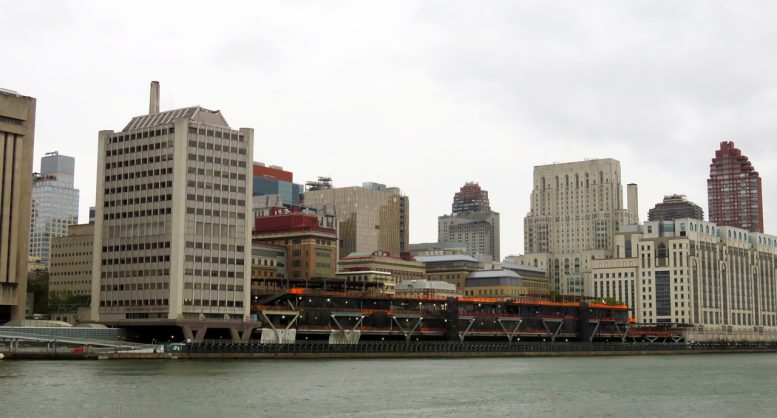 River Campus of the Rockefeller University. Photos by the author unless indicated otherwise. 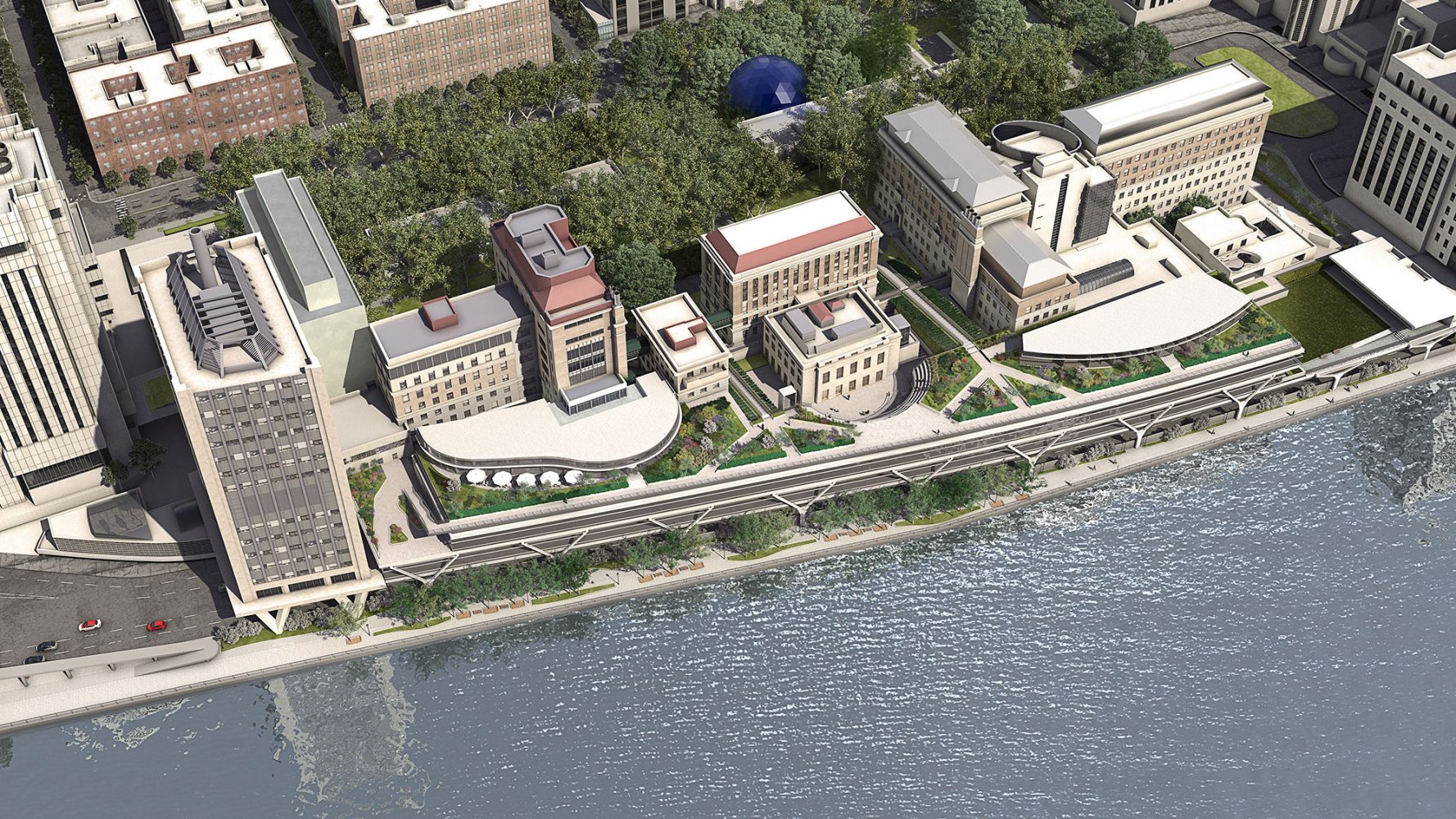 Work on the East River Drive began in the early 1930’s between 92nd Street and 125th Street. Upon completion of this first phase, the Planning Department praised the project as a “fine example in modern highway construction” and called for extending the drive along the river’s entire length, citing the need to “divert large volumes of traffic from congested Manhattan streets and provide fast, convenient travel for great numbers of motorists.” The mammoth task was spearheaded by master builder Robert Moses. By 1966, the project, renamed after the late President Franklin Delano Roosevelt, ran 9.44 miles from the Battery north to the Triboro Bridge, where it continued as the Harlem River Drive. Some sections run on elevated platforms, while others were converted from existing boulevards. Some portions were built atop new riverfront infill, including a section between 23rd and 30th streets that was built on World War II rubble from British cities carried by returning American cargo ships as ballast. 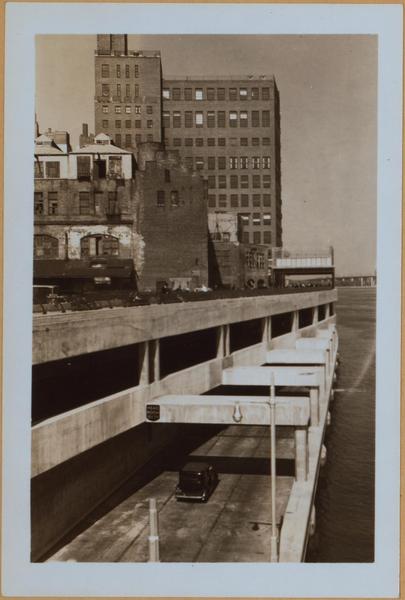 The platform north of East 81st Street, the same as seen in the earlier 1940 photo. Looking west.

A few segments, most notably the one by the United Nations headquarters between 42nd and 48th Streets, by the Carl Schulz Park and the Gracie Mansion between 79th and 90th Streets, and at Sutton Place in the upper 50’s, were capped with park-bearing platforms. These platforms connected their respective neighborhoods to the river, while transforming the expressway into a quasi-tunnel, exposed only along its river-facing flank. A few high-rise buildings also straddle the highway in a similar manner. Queensboro Bridge is on the left. The Scholars Building is in the center right. Looking west. The rest of the 14-acre campus faces the FDR Drive with a rustic wall of heavy stone masonry and large, brooding arches, which exude an old-world, medieval flair.

The University was founded by John D. Rockefeller in 1901 as The Rockefeller Institute for Medical Research, which became America’s first biomedical institute. Some of the breakthroughs made within its labs include the discovery of blood groups, establishment of travel vaccinations as a common practice, development of virology as an independent field, as well as many others. 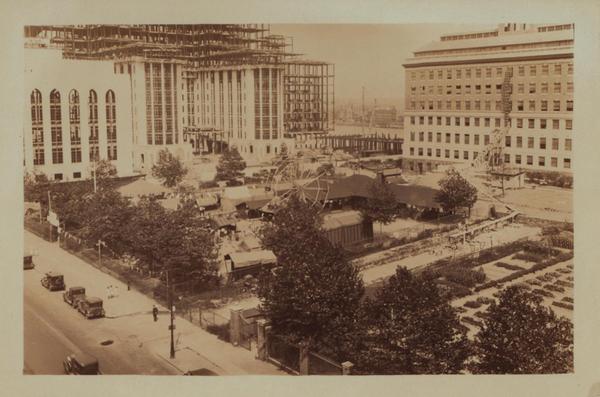 Today, the university is in dire need of upgrading its research facilities. Space is a scarce commodity in Manhattan, particularly in neighborhoods such as the Upper East Side. A series of mid-rise, pre-war buildings face the garden, designed by landscape architect Dan Kiley, at the center of the campus. Taller buildings along the edges blend into the surrounding skyscraper thicket. The extension transforms eastern periphery of the campus into a low-slung, river-facing structure that would meet the East River and face Roosevelt Island with a promenade along its two-acre open space.

The new building, designed by Rafael Viñoly Architects, fuses the tower and deck typologies that currently span the highway. The 160,000-square-foot building sits atop the expressway upon Y-shaped pylons. The pylons echo the V-shaped supports of the Rockefeller Research Building directly south at East 63rd Street. Built in 1984, the 14-story high-rise pioneered the idea of stacking labs atop the river-bound highway.

The other end of the campus extension is book-ended by the mid-rise facility of the Hospital of Special Surgery, which also sits upon a deck that runs from East 68th to East 71st streets. Combined, the highway is concealed for an eight-block stretch, fronted by a low-lying esplanade known as the John Finley Walk. The university’s scope of construction includes a renovation of the public space. 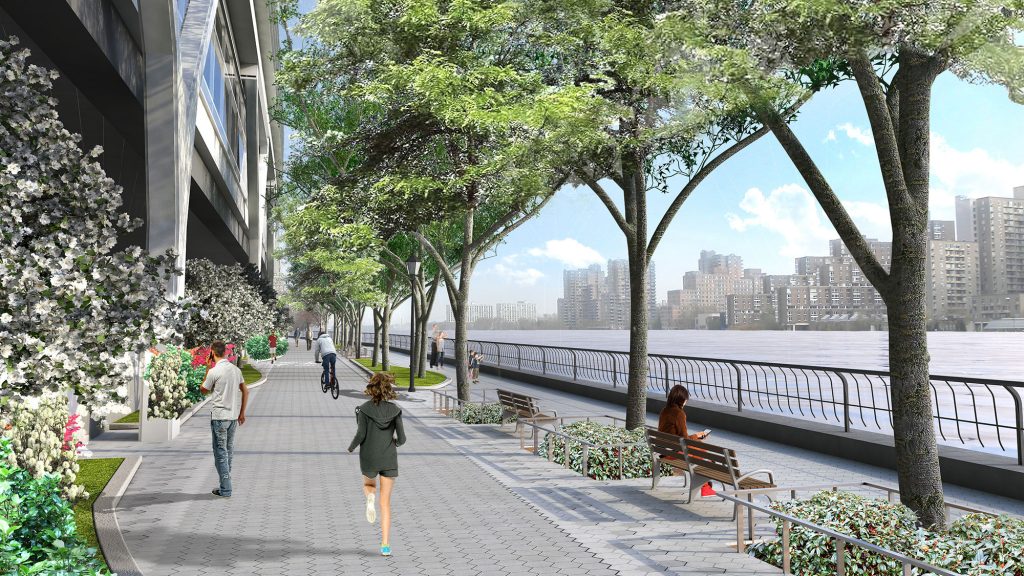 Though some parts of the structure stack as many as five levels, the majority of its interior spans two massive floors that house laboratories and facilities such as dining and community space. The building’s horizontality is underscored by a series of prominent horizontal mullions that would run across its façade, adding a sense of motion in tune with the traffic zooming beneath. 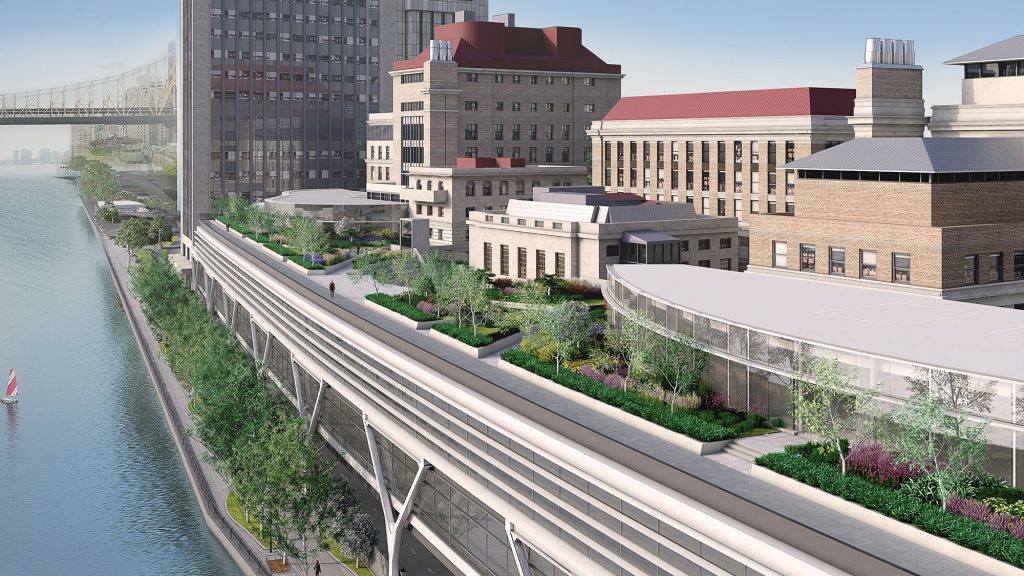 The deck surface rises, falls and meanders as required by building program. Two curved-glass pavilions would face the green promenade, extending the adjacent historical buildings while providing access for the space beneath. Two landscaped ramps would serve as access points from the existing garden along York Avenue. A semi-circular sunken plaza with amphitheater seating forms the focal point of the composition, juxtaposed against the pre-war building that once faced the river.

Two smaller decks would bookend the platform’s north and south ends, with their lower elevation bringing them on the same level as the platforms of the adjacent high-rises.

An in-depth walkthrough of the proposed campus is available on the University’s YouTube page.

To minimize direct construction over the busy expressway, the deck was assembled in massive, 800,000-pound segments. Each of the 19 steel sections was delivered to the site via the river by the Chesapeake 1000, the largest marine crane on the East Coast. Construction was conducted chiefly at night, in order to minimize expressway closures. 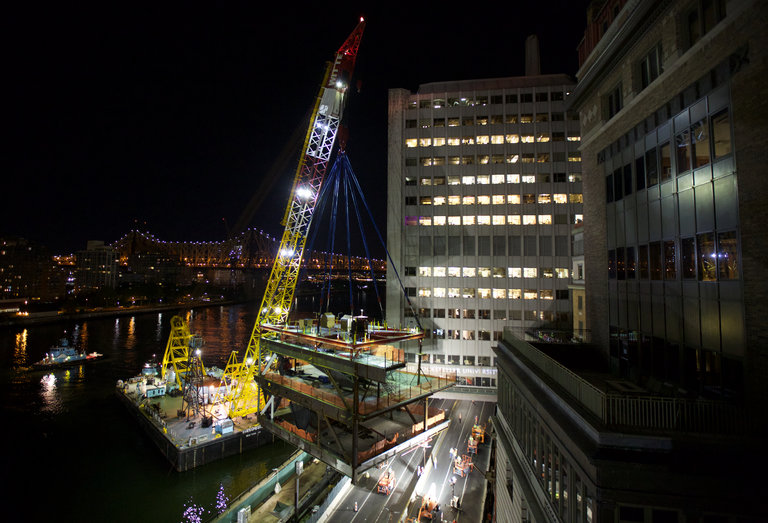 In the New York Times article with the above photo, Timothy O’Connor, the executive vice president of Rockefeller, describes the horizontal structure as “utterly anti-New York.” With all due respect, we disagree, as such projects present a model for future development in the increasingly congested city. The concept of large-scale, platform-based projects, introduced by Terminal City above Grand Central Terminal-adjacent tracks almost a century ago, is now more popular than ever, as megaprojects such as the Hudson Yards and Pacific Park are transforming Manhattan and Brooklyn. Public spaces like the High Line further embrace the layered city concept.

Robert Moses believed that expressways ought to provide a scenic driving experience. Even if jaded drivers may not pay close attention to familiar scenery, a ride across the Franklin Delano Roosevelt Drive makes for an epic urban journey. The highway’s narrow lanes weave past the man-made peaks and valleys of Manhattan and beneath the mythical bridge spans, as the ever-growing silhouettes of Brooklyn and Queens rise on the other side of the river. But even this breathtaking experience would be worth sacrificing if decking over the roadway means re-connecting the city to its waterfront. The Rockefeller Center River Campus caps the highway with high-tech facilities and greenery that cascades like the Hanging Gardens of Babylon, exuding the delirious spirit of the multi-layered metropolis that early urban visionaries fantasized about. We wish to see more projects of this type, whether consisting of private development or, better yet, public amenities like schools and libraries, topped by green promenades.