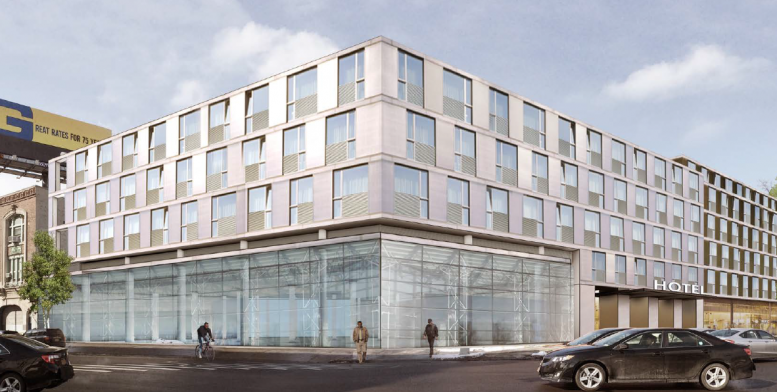 A conceptual rendering for 36-20 Steinway Street, via RKF

Earlier this week, DNAinfo caught the pre-filing for a five-story hotel that would replace a Western Beef supermarket at 36-20 Steinway Street in Long Island City. Now official plans have been submitted to the Department of Buildings for the project, which will rise between 36th Avenue and Northern Boulevard, right across from Sunnyside Yards.

North Williamsburg-based JMH Development, led by Jason Halpern, is developing the hotel. It would span 119,722 square feet of commercial space and host 289 rooms. The plans don’t mention retail space, but RKF is marketing 18,200 square feet of retail at the property. The rendering above is a conceptual one included in their brochure for the site.

The 6o-foot-tall building would have a bar, breakfast area, and 28 rooms on the ground floor, 67 rooms on the second floor, 66 rooms apiece on the third and fourth floors, and 49 rooms on the fifth floor. The cellar levels would include a 77-car garage, a gym, food prep area, break room, and 14 hotel rooms.

Gene Kaufman apparently had a busy day at the Department of Buildings yesterday, and he is going to be responsible for the design of this project. He also filed plans for large hotels in the Garment District and Chelsea.

Just like those two neighborhoods, this swath of Long Island City remains industrially zoned. While manufacturing and office space can be built here, hotels are typically the most profitable form of new construction on industrial land.

JMH leased the Western Beef store and four adjacent buildings controlled by the supermarket for $19.6 million in September.