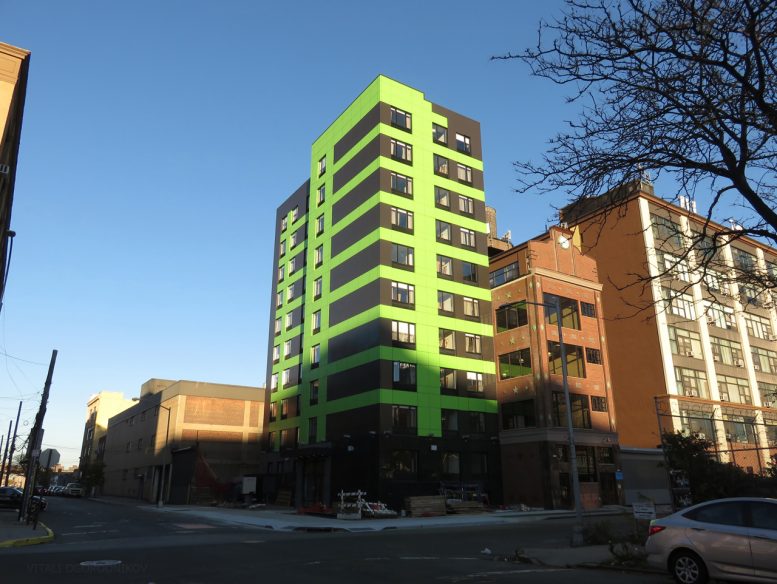 Completion is near for the 10-story, 74-room hotel under construction at 40-47 22nd Street, in northern Long Island City. The property will most likely operate under the Howard Johnson brand, which completed another 10-story hotel four blocks northwest at 38-61 12th Street in 2014. The project’s developer is Ratan Realty Three LLC, with Michael Kang serving as the architect.

Permits show that the 30,015-square-foot property dedicates 25,048 square feet to direct commercial use, which translates into an average of 338 square feet per room. The structure rises 102 feet to the main roof, with its bulkhead bringing the total to around 110 feet. Although modest by the standards of the Long Island City skyline, the building rises above its mid-rise neighbors, allowing for a sweeping panorama of the Ed Koch Queensboro Bridge, Roosevelt Island, and the Manhattan skyline from the top levels. Every room that faces south opens upon the Long Island City skyline, as the hotel overlooks a large parking lot and a low-rise commercial property on the block across the street. Given the current pace of neighborhood development, we expect to see the block redeveloped sooner rather than later.

The building occupies just 53 percent of the 5,011-square-foot lot, which measures 100 feet long along 22nd Street and 50 feet along 41st Avenue. The resulting setback breaks the existing street wall, exposing the decorated lot wall of the recently-renovated four-story neighbor to the east. We hope to see the space in front of the hotel developed as a public plaza, or at least include greenery and seating, even if intended for hotel guests only. Unfortunately, there is a good chance that the space would be used for outdoor parking, similar to the nearby Howard Johnson at 38-61 12th Street. The building’s slender profile contrasts with the squat loft buildings that dominate the streetscape. The lime-green façade stands out against the surrounding palette of beige, brown, and red brick. The same type of brick composed the single-story warehouse that occupied the site until the start of the decade. In June of 2013, the lot was acquired by 22 Street Sai Hotel LLC, which almost immediately re-sold it to Ratan Realty Three LLC for $4.2 million. The load-bearing masonry structure, reinforced with rebar, rose over the course of late 2014 and 2015. 40-47 22nd Street is situated at the northwest corner of the Queens Plaza district, where rapid real estate development creeps up to the edges of Ravenswood to the north. The property sits within a quarter-square-mile hotel district bound by Queens Plaza to the south, 38th Avenue to the north, 12th Street to the west, and 31st Street and Northern Boulevard to the east. Over 20 hotels were built in this area since the start of the millennium, with several more on the way. This trend was enabled by an abundance of underbuilt and vacant properties, as well as by adjacency to subway lines that put Midtown within a few minutes’ ride. 40-47 22nd Street sits 400 feet southeast of the 21 St-Queensbridge station of the F train. The Queensboro Plaza station of the N, W, and 7 trains sits three blocks to the south. Queens Plaza, served by the E, M, and R trains, is located two blocks further. The nearby bridge puts Manhattan within easy driving, biking, and walking distance.