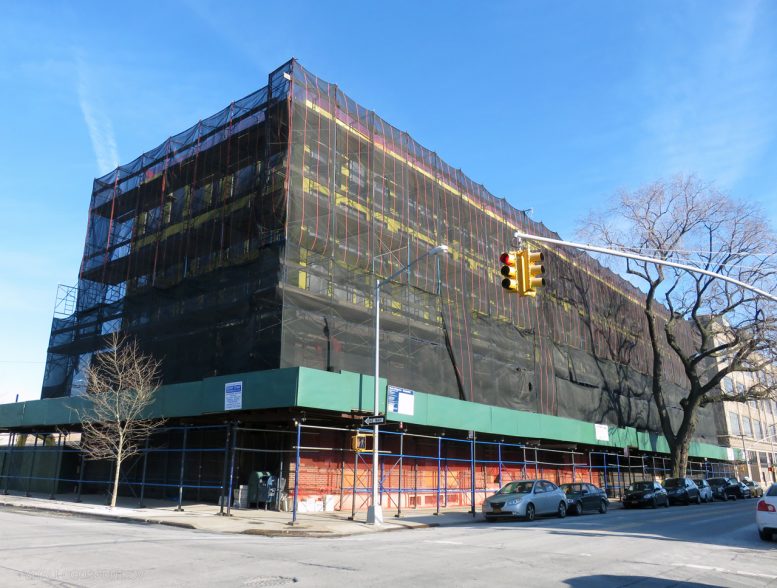 Incorporation of the pre-war façade into the new building is a welcome approach, as it preserves the architectural legacy of the rapidly changing neighborhood. The Hakimian Organization is in charge of the commercial-to-residential conversion, which is designed by GreenbergFarrow Architecture and built by ESM Construction Corp.

The original building was erected in 1919, as part of the construction boom spurred by the completion of the nearby Queensboro Bridge in 1909. The 22,280-square-foot office building took up the entire block along 38th Avenue, stretching 195 feet between 33rd Street to the west and 34th Street to the east. The property sold for $14.4 million in November 2014. Around the same time, Saviour Sultana and Photios Cougentakis snatched up two development plots immediately north at 37-29 33rd Street and 37-14 34th Street, where they are proposing a six-story, 43-unit mixed-use building and two seven-story mid-rises containing 80 units and retail space, respectively. Construction commenced in late 2015, and the steel superstructure topped out in late summer 2016. The developer anticipates completion later this year, which sounds reasonable given current construction progress. Building permits show that the 44,552 square feet of added floor space would boost the total floor area to 66,832 square feet, almost all of which is allocated for residential use. The number of parking spaces would grow from 18 for the existing building to 31 for the expanded structure. The latest permit states that the vertical expansion would boost the 25-foot-high building to 65 feet. Twin bulkheads would push the total past 70 feet. At 33-01 38th Avenue, the architects juxtapose the articulated brick façade with the distinctly modern aesthetic applied to the upper floors. Dark-colored mullions delineate the narrow, floor-to-ceiling windows that are arranged in a staggered pattern. Black bands mark the floor plates and streamline the composition by underscoring the building’s horizontal nature. Dark window frames installed within the building’s historic portion reference the new floors.

The structural expansion is concealed entirely within the original building’s footprint and preserves the existing open space at the northern corner of the lot at 33rd Street. It is not yet known whether this space would continue to function as a parking lot.

The amenity list includes a fitness center, a game room, laundry facilities, a rooftop terrace and parking for 47 bicycles. Sweeping redevelopment, stimulated by a 2008 upzoning, is transforming the surrounding blocks, which are well-served both by public transit and arterial streets such as Northern Boulevard. The 39th Avenue station of the N and W trains, the 36th Street station of the E, M and R trains, and the nearby Queensboro Bridge place Midtown within easy access by train, car and bicycle.

Several nearby lots on adjacent blocks have been cleared for construction of yet-to-be-announced projects, and a number of under-built properties nearby are likely to follow suit. Expect to see more development announcements in the near future.