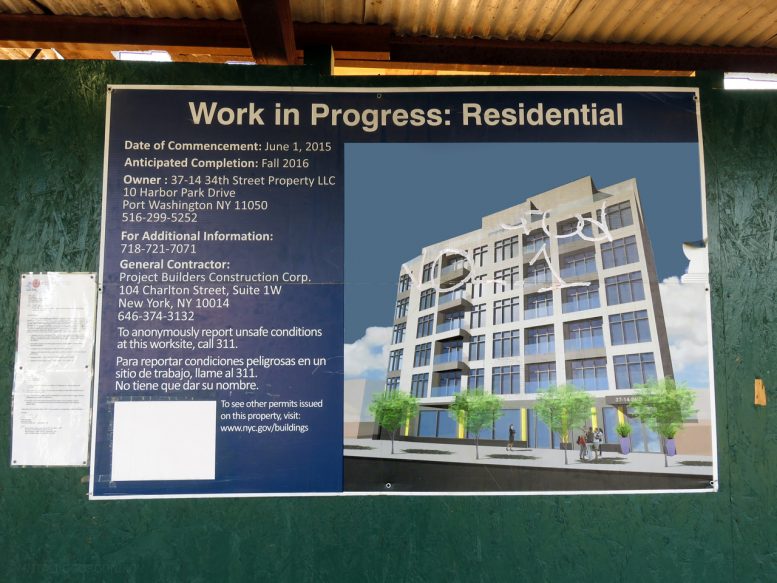 The units would be spread across 53,275 square feet of residential space, resulting in an average unit size of 665 square feet, and the lower floors would contain 13,060 square feet of commercial space. Photios Cougentakis of Port Washington-based Constructamax Inc. is listed as the owner, acting through 37-14 34th Street Property, LLC. Morali Architects PLLC are designing the complex, with Project Builders Construction Corp. acting as the general contractor. The 19,500-square-foot site stretches through the block, spanning lots between 37-11 and 37-19 33rd Street, and between 37-12 and 37-18 34th Street. A single-story commercial facility called Bridge Plaza, which previously stood at the site, was used as a family health center, an education firm and offices for the city’s human resources administration. The property, located within the M1-2/R6A zoning district and containing at least 58,500 buildable square feet as of right, was sold in fall 2014 for $9.7 million. The western portion of the building, situated at 33rd Street, was torn down by the end of 2016 to make way for phase one. The eastern half of the building still stands at 34th Street, awaiting the development of phase two. Looking southeast from 33rd Street, towards the partially-demolished structure occupying the site of phase 2.

Construction permits for phase one were filed in March 2015, listing Morali Architects as the applicant of record and Bohler Engineering NY, PLLC as the filing representative. The building footprint would cover roughly one-third of the lot. The total construction area is listed at 39,000 square feet, with 29,520 square feet allocated for residential use and 3,164 square feet reserved for commercial. The steel-frame structure would fit neatly within the zoning envelope, rising 70 feet to the main roof. A mechanical bulkhead, used for servicing the building’s two elevators, is likely to boost the total height into the 80-foot range.

The Remedial Action Work Plan, prepared by Athenica Environmental Services and dated May 2015, states that flexible programming would accommodate phased development. Most of the phase one basement would initially consist of open-floor storage. Temporary parking would take up three-quarters of the 6,031-square-foot ground floor, containing 20 spaces with seven more in reserve. A small, 316-square-foot commercial space and a 1,258-square-foot residential lobby and mail room take up the rest of the floor. Ground floor plan of phase one, showing temporary parking that will be replaced by commercial space during phase 2. Drawing by Morali Architects, dated February 2015. Publicly available via the Remedial Action Work Plan. A large terrace would overlook the street, facing Manhattan.

Phase two would replace the remaining on-site warehouse with a 34th Street building similar to its phase one counterpart. The ground floor at phase one would gain a roughly 4,500-square-foot commercial space as parking is relocated to the cellar, replacing storage space to become part of a site-spanning, 88-car garage, accessible via ramp from 34th Street. A roughly 7,000-square-foot, shared rear yard between the buildings would sit atop the central portion of the garage.

Permits covering the entire complex were filed in December 2015.

Renderings for phase two have yet to be revealed. The phase one façade consists of large windows set within a light-colored mullion grid, with an angled wall and balcony array lending a distinctive touch. Together with seven-story, 43-unit 37-29 33rd Street and six-story, 94-unit 33-01 38th Avenue rising immediately to the south, the building would form a continuous, mid-rise street wall. The large fenced-off lot across the street, already cleared, is a likely candidate for a future building of a similar size.