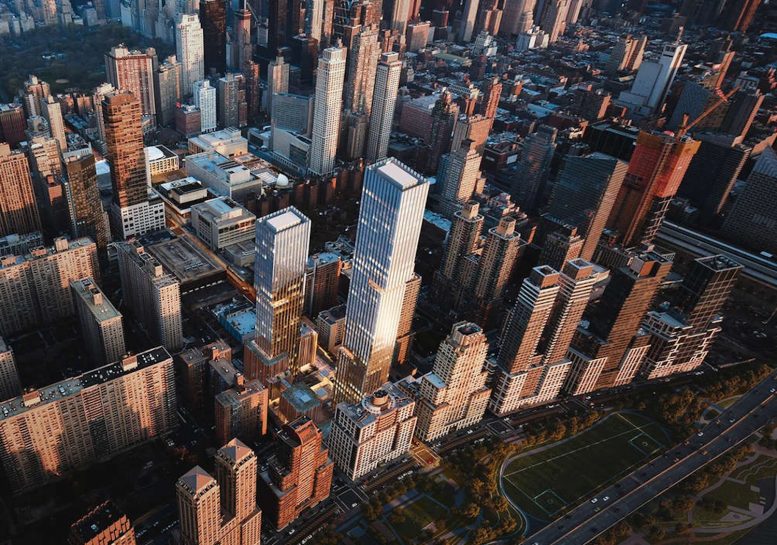 Rendering of 125 West End Avenue on the Upper West Side. Rendering by Ars Longa

The project originates in the sale of the ABC campus last year. Silverstein sold three components of the entire 1.7-million-square-foot ABC portfolio to Taconic Investments for approximately $220 million, as reported by the Commercial Observer. Those assets include 125 West End Avenue, which hosts an office building totaling almost 400,000 square feet, as well as 320 West 66th Street, which is occupied by an approximately 120,000-square-foot office and television studio combo. A vacant parcel dubbed “Lot 61” was also a part of the assemblage, as reported by CityRealty.

Combined, the air rights and existent structures total 619,012 square feet of development rights, which is very substantial for the neighborhood. In comparison 200 Amsterdam Avenue, which YIMBY was the first to reveal back in 2016, totals 400,000 square feet, and stands 668 feet to the top of its crown.

Details for the two towers of 125 West End Avenue are not yet available, but gauging the rendering, a pinnacle height of approximately 750 feet would not be an unreasonable estimate. While the plans are contextualized within a neighborhood entirely dominated by high-rise housing, that has not stopped the NIMBYs of the neighboring Lincoln Towers from launching lawsuit after lawsuit against 200 Amsterdam Avenue, to no benefit of their own, and to the detriment of the Department of Buildings processes citywide.

The renderings originate from Chinese visualization firm Ars Longa, whose website includes a number of other projects in New York City currently under construction. The design appears to be fairly conservative, with the program for both towers consisting of a massing of stacked and slightly offset boxes interspersed with cutouts.

While the design is hardly groundbreaking, it would still be far superior to the hostile Soviet architecture of Lincoln Towers, immediately to the north. A breakdown of usage has not been released, but it would appear that the plans indicate a majority of the development would be residential, with possible community and office elements included in the lower levels.

No completion date has been released for the site, and with demolition for the extant structures yet to begin, it would be safe to say these plans could still change significantly between today and whenever they are completed.