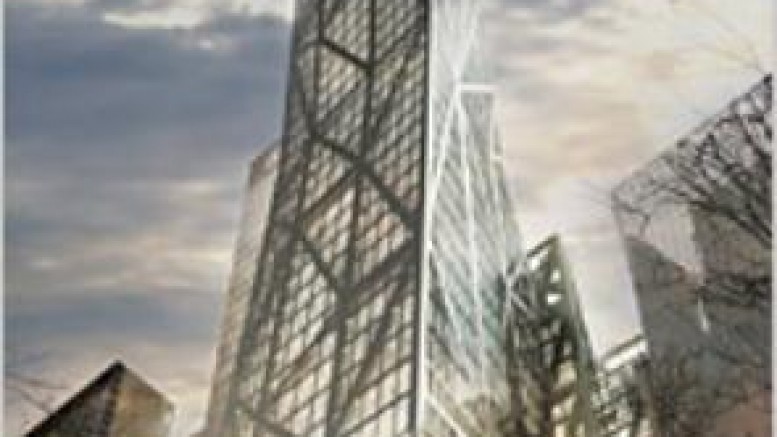 New York’s zoning code is relatively uncomplicated. Structures are either built as-of-right, which does not involve the Department of City Planning, or they must go through ULURP, the Uniform Land Use Review Procedure. Unfortunately, the zoning process is subject to arbitrary opinions and judgements. Amanda Burden is the head of New York’s City Planning Department, and her say is what decides the fate of developments that have to go through ULURP. While her taste is normally impeccable, there has been one major injustice: the beheading of Jean Nouvel’s Torre Verre. Structures built as-of-right, like 432 Park Avenue, require no approvals because they stick to the zoning code in the neighborhood where they are being built. No land-use review is necessary, as long as structures conform to the code and the amount of space they are allowed to contain. Thus, 432 Park will be rising to approximately 1,400 feet with no public input. If modifications to the zoning code are necessary–as in the case of Torre Verre–proposals must go through ULURP, the city’s long, arduous, and convoluted process for approving exceptions to the zoning code. While NIMBYs have no say regarding structures built as-of-right, those that go through ULURP are beholden to neighborhood criticism and, ultimately, the whims of the City Planning Commission. Thus, the Torre Verre had its height chopped; Amanda Burden found the design unsatisfactory, and decreed that the building did not deserve to rise as tall as the Empire State. For those unfamiliar with the process, ULURP involves either six or seven steps, depending on the Mayor’s decision:

While 432 Park did not have to endure this process, Torre Verre fell victim to step 4, when Amanda Burden decided that she didn’t like the size of the building. NIMBYs had voiced significant concern over the building’s size, going so far as to declare the building’s vicinity–the heart of Midtown Manhattan–a ‘mid-rise neighborhood’. Originally proposed at 1,250 feet in height, Amanda Burden sliced the top 200 feet off simply because she didn’t like the design.

The beheading of Torre Verre shows how the zoning process is completely subject to opinions and whims. Although far from unanimous, most people agree that the Torre Verre–both the shortened tower and the original 1,250′ version–was quite beautiful. The breathtaking facade and sheer verticality of the building typify New York, and exemplify the qualities that make New York Gotham City. The design was sophisticated, elegant, and bold, and the 1,250′ version would have provided the Museum of Modern Art with a true architectural masterpiece, courtesy of Jean Nouvel. While Torre Verre was subject to opinion and whim, 432 Park was not. Either height filed with the Department of Buildings for 432 Park (1,379′ on some documents, 1,397′ on others) would make it the tallest in the city. Despite the size of the building, the design is completely bland–the tower is literally a monolith, with no variation in facade or floors as the building rises. 432 Park may be an incredibly skinny box, but it’s a box nonetheless. While the City Planning Commission believed Nouvel and Moma  had “not made a convincing argument that the design of the tower’s top, with the uppermost 200 feet of the building, [merited] being in the zone of the Empire State Building’s iconic spire,” (via The Observer) there are two other towers within a short walking distance that will both top the Empire State Building in height. Thus, the argument that 1,250 feet up is some kind of iconic zone for New York is moot. In the time since Ms. Burden’s decision, the number of buildings rising or soon to rise to the Empire State Building’s height has proliferated, with four towers now set to top New York’s most iconic structure (432 Park, 1 WTC, 2 WTC, and the Hudson Yards North Tower), and a fifth (225 West 57th) is also likely to surpass the ESB, although no official height has been released. Why should the Torre Verre have to suffer while these other projects are allowed to pass the Empire State with no debate at all? New York’s building climate has changed immensely since the decision on Torre Verre, and it would do justice to the city if the decision could somehow be revisited.

6 Comments on "Two Towers, One Zoning Code: A Major Injustice"