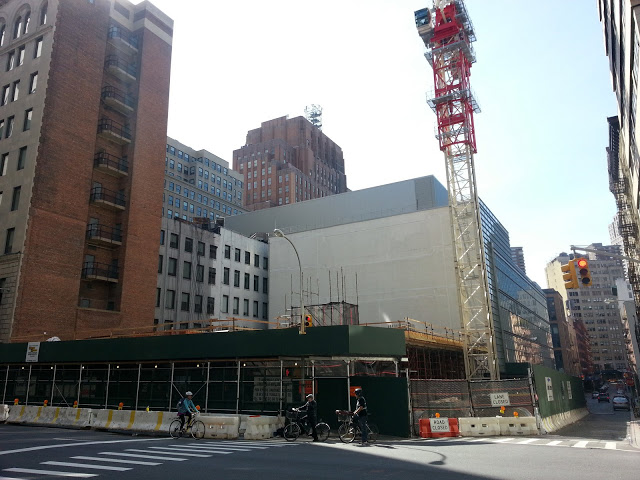 Progress continues at 150 Greenwich, which should be the first of the new World Trade Center towers to open. Glass has reached the top of the building on three out of four sides, and exterior construction is on the verge of completion. If all goes to plan, 150 Greenwich should open by next year.

175 Greenwich is still stuck at its podium levels, and 200 Greenwich is—unfortunately—still a stump. With work wrapping up on 150 Greenwich and One World Trade Center, leasing at the two remaining towers will hopefully pick up as the site regains some semblance of functionality.

Just a few blocks north, 56 Leonard is picking up the slack. The Herzog & de Meuron-designed tower is finally above street level, after a wait of five years. The concrete bathtub for the tower’s foundation had already been poured prior to the recession, so work on lower levels was completed quickly—and now, 56 Leonard is climbing towards its 821-foot pinnacle.

Despite the building’s complicated layout and floor-to-floor variations, completion is scheduled for 2015—meaning 56 Leonard will rise at the approximate rate of one floor per week. Given the development’s relatively low-rise surroundings, 56 Leonard should be visible on the skyline by the end of the year.