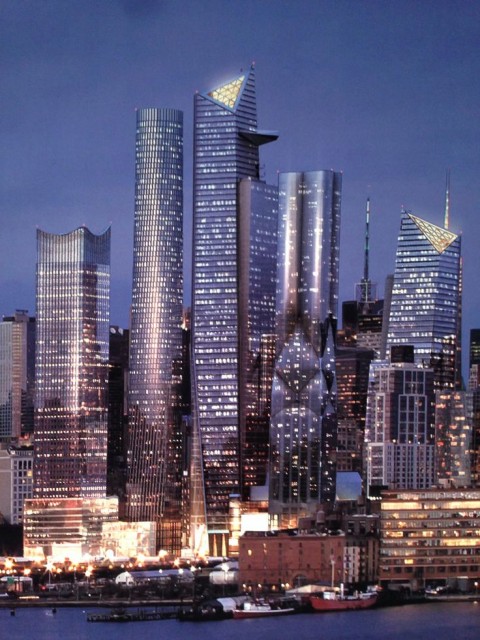 Related has new renderings up at Time Warner Center depicting The Hudson Yards, and in addition to dramatic changes for the Equinox Tower, a model depicting 50 and 55 Hudson Yards has been revealed. As YIMBY reported in early October, Related has expanded their presence in the neighborhood dramatically, acquiring the entire block to the north of the railyards. The two new buildings increase the site’s scope by nearly 4 million square feet. 55 Hudson Yards is where Extell’s World Product Center – aka ‘One Hudson Boulevard’ – would have risen. That site was acquired by Related in a land swap, and it appears that the tower has undergone a major revision from Extell’s version. Indeed, the total space has been reduced to 1.3 million square feet, and the shrinkage is corroborated by renderings, which show a relatively short tower that will stand 47 stories tall. Relative is key, as 55 Hudson Yards will still stand a similar height to the Coach Tower, which will be approximately 900 feet tall. 55 Hudson Yards will be joined by 50 Hudson Yards, aka ‘The McDonalds Drive-Thru Tower,’ which is another major addition to Related’s  assemblage. That building will crack the 1,000 foot mark, and appears slightly shorter than the Hudson Yards North Tower. The Equinox Tower – which formerly incorporated minor setbacks – has been vertically extruded and morphed into a cylindrical shape, possibly in response to Related’s acquisition of 55 Hudson Yards. The original version was 950 feet tall, and the new design soars well over 1,000 feet, though no exact figures were available. The scope of Related’s plan is even more impressive than before, and the two new towers will be roughly the same size as the office giants of the original proposal. Though no official timeline has been released, work on 50 and 55 Hudson Yards will probably be finished by 2020.