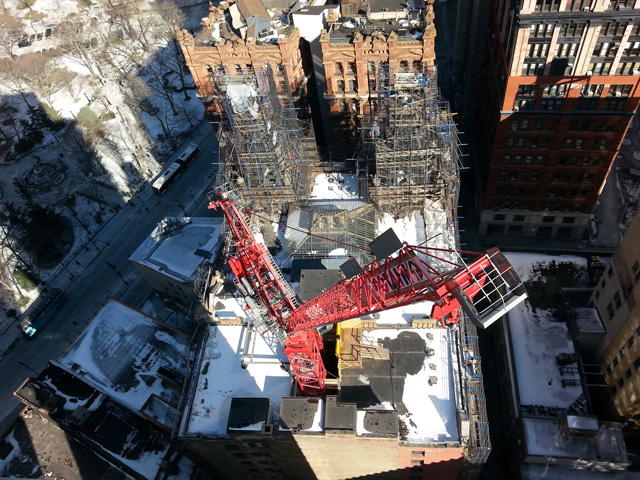 5 Beekman Street -- view from The Lara

The conversion and expansion at 5 Beekman Street is making major headway; foundation work has begun, and cranes are present on-site. The new portion of the development will stand 47 floors and 595 feet, making it semi-prominent amongst the towers of Lower Manhattan; GFI Development is building the project, while Gerner Kronick + Valcarcel is designing. The elevated shots were taken from the rooftop of The Lara. 5 Beekman Street, with the foundations for the tower visible — view from The Lara

5 Beekman Street was a hive of activity this week, and it seems the tower portion is almost ready to rise above ground. Permits for the addition were denied late last year — and the site has a limited stop-work order issued January 23rd — but besides administrative formalities, everything is lined up for imminent verticality. Whether the stop-work order still holds is also mysterious, and as of yesterday, workers were clearly buzzing about the site. A ‘Bay Crane’ was even hovering several inches above the street. A new Schedule A indicates the hotel (to be managed by Thompson) will have 288 rooms, including two duplex suites that will span the top two floors. Residences will begin on the thirteenth floor, and there will be 69 in total — upper levels will be single units, so it seems that 5 Beekman will be targeting the super-luxury market. There will be six penthouses in total. No renderings have been released, but given the tower’s footprint, the final product will be very thin. Completion is likely in late 2015 or early 2016.