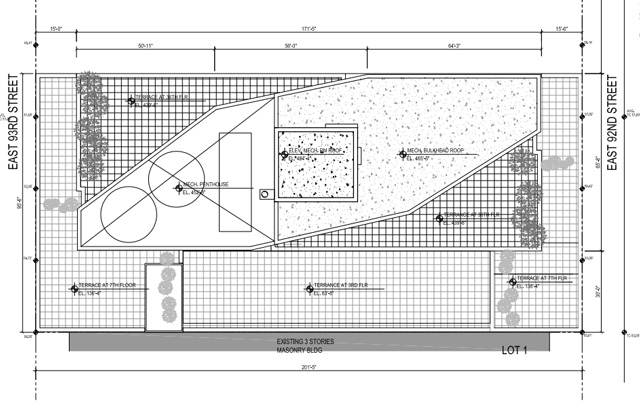 Fresh permits are up for Related’s new project at 203 East 92nd Street, which will stand 36 stories tall. The architect of record is Handel, and the structure will be mixed-use; lower levels will be occupied by offices and a school, while the tower portion will contain 308 residences. The City Planning Commission granted approval to the plans this past August. Renderings were also attached to the latest filings, and indicate a fairly typical design; the facade will be a mix of masonry and glass. The images conceal the building’s irregular octagonal shape, which will add a touch of flair to an otherwise reserved concept. Certainly, 203 East 92nd Street will be far more attractive than surrounding towers; aesthetically, the neighborhood suffers from a blight of post-war buildings. 203 East 92nd Street — viewed from the South, image from the DOB

203 East 92nd Street saw a fair deal of controversy after Related announced intentions to develop the site, which housed Ruppert Playground; neighborhood NIMBYs opposed the project without any solid ground, and consequently, plans are now moving ahead.

Per The Wall Street Journal, initial plans were for a 49-story tower; evidently those have been shelved in favor of Handel’s shorter building. Foundation work has been approved and work should be underway shortly, though no completion date has been announced.