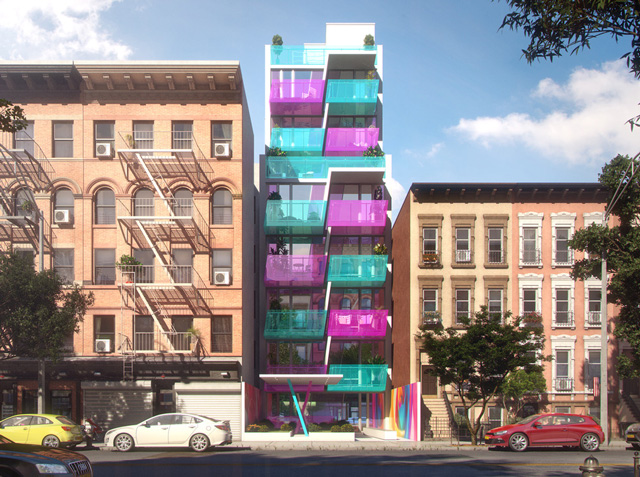 The first renderings are up for a new building set to rise at 329 Pleasant Avenue, in East Harlem; for those unfamiliar with the neighborhood, the cross-streets place the project one block east of First Avenue and 117th Street. While TPG is listed as the architect of record on DOB permits, HAP — which is developing the site — notes that the project’s designer is Karim Rashid. 329 Pleasant Avenue from above, image via Karim Rashid/HAP

Most of East Harlem is far from prime real estate — and even designating the area as ‘up and coming’ may be somewhat of a stretch — but the micro-hood surrounding 329 Pleasant Avenue is a marked contrast to much of the vicinity. 329 Pleasant Avenue has several blocks of pre-war stock surrounding it on all sides, which adds a buffer against the massive public housing developments that still characterize much of the neighborhood.

Additionally, a variety of big-box stores have their only Manhattan presence just to the east of 329 Pleasant Avenue, including Costco. While many New Yorkers have to drive to the FDR-adjacent outpost, HAP’s project is within a short walking distance. Aesthetically, the eight-story building presents a bright contrast to its pre-war surrounds, with the pink and blue balconies offering a decided departure from the neighborhood vernacular. While the disruption of the street-wall is unfortunate, East Harlem has bigger issues that must be dealt with, and developing more infill housing takes precedence over perfect design. Besides the balconies, 329 Pleasant Avenue’s presence is modern and straight-forward, with the majority of frills confined to within the structure. HAP’s page on the building notes that it will have twenty apartments, as well as street-level retail. Permits indicate the site’s total scope is 15,255 square feet, with 640 square feet to be dedicated to commercial space. No completion date has been announced, but permits for construction were partially approved last October; given the size of the project, a 2015 opening date would be a reasonable assumption.