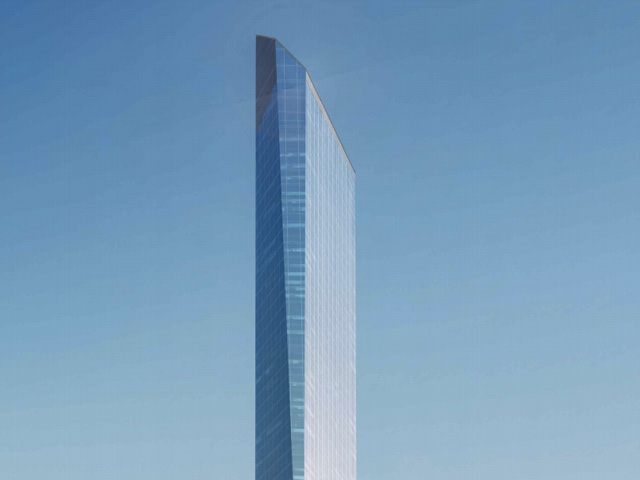 After last week’s post on the latest DOB filings at 41 East 22nd Street, a tipster passed along additional documents, complete with renderings, that reveal the full scope of the project. The site’s developer is Continuum — headed by Bruce Eichner — and the architects are Kohn Pederson Fox and Goldstein Hill & West. While the previous drawings were comprehensive, the new renderings offer significantly clearer details on the skyscraper, which will become the tallest building between Midtown and Lower Manhattan. Plans may have undergone slight revisions since the included images were conceived in November, but they appear to be very similar to the most recent DOB filings. The tower will eventually stand 60 stories and 777 feet tall.

Different angle of the project, image via KPF

Per the tipster, the concept for 41 East 22nd Street has undergone a series of evolutions, and the tower has gained height during the design process. KPF’s hand is evident, and the scheme bears similarities to the firm’s similarly glassy and jagged creations at Related’s Hudson Yards development. Perhaps the tower’s most striking element — besides its sheer height — is the cantilever, arching over neighboring buildings to the west. The ‘champagne glass’ has clearly been refined, but the base definitely resembles a stem, fluting upwards into the structure’s residential floors. Glass dominates the vast majority of the exterior, but the amenity-laden base is actually clad in masonry; the new drawings note that the “design [is] pending confirmation,” but as the renderings make clear, there will be a marked contrast between the podium’s facade and the rest of the building. Despite the stone exterior, the base will still have enormous windows looking out onto 22nd Street, and the lobby of 41 East 22nd Street will be an experience unto itself. With One Madison located down the block, the neighborhood offers ample competition in terms of condominium product, but it would appear that Eichner’s 81-unit development is poised to take the super-luxe crown for all of Lower Manhattan. While no completion date has been announced, demolition of the existing structures is now underway.