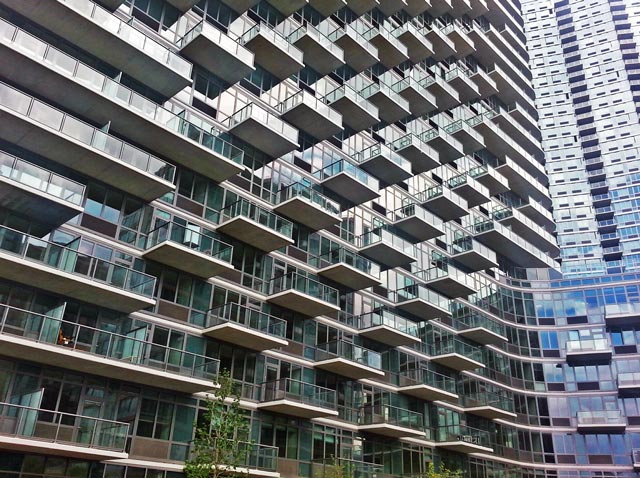 YIMBY sat down with TF Cornerstone’s Sofia Estevez and Jon McMillan to discuss the firm’s recent work, including the Arquitectonica-designed East Coast Long Island City, which established an entirely new neighborhood. The development’s completion is a milestone for the Queens waterfront, which has quickly evolved from post-industrial to vibrant and walkable; with 4610 Center Boulevard now open — and already 50% leased — the company’s focus is about to shift to several other major sites across Manhattan, Brooklyn, and Queens.

Just below the East Coast site, TF Cornerstone is building the next phase of Hunter’s Point South, which will have 1,200 units. Other imminent developments include 33 Bond Street in Brooklyn — revealed below — and one of the largest buildings in Manhattan, at 606 West 57th Street.

What was the process behind TF Cornerstone’s acquisition of the East Coast site?

J: We bought it from Pepsi, gave it to the state, and then leased the land back from the state, because that gave us lots of development flexibility. It’s a 99-year lease. We also paid for the construction of all the infrastructure — the streets, the parks. And what was the most challenging aspect of building out such a large development?

S: It was really creating the neighborhood. That was the most difficult thing, because when we started, there was nothing here. The first building had 500 units, but it was the only building in the vicinity. In the next phase, we made sure to include amenities, as well as a Duane Reade, a market — all of that — but the waterfront was still quite raw. It’s difficult, but it’s what TF Cornerstone has always done. We did the same thing in Battery Park City and the West Village, where — once upon a time — there was also nothing.

J: I’d say about  40,000 square feet. The city didn’t want too much because it would compete with Vernon Boulevard, which is the more traditional main street. So we actually had to fight to get more. How many units are in 4610, and which building is the largest?

S: 4610 has 584 units, and 4545 is the largest — it has 820 apartments. We consolidated all of the amenities in two of the buildings — at the northern and southern ends of the site — and they sprawl out on top of the two parking garages. When you were building East Coast, you had the Pepsi-Cola sign out in front; how did you decide to integrate it into the project?

S: When we bought site, part of the deal was that we had to keep the Pepsi sign up. It’s not landmarked, but it’s treated as such.

J: We eventually figured out where best to put it, and that’s right in front of 4610. So it was moved?

J: It was moved twice; it used to be on top of the Pepsi factory, so we took it off the factory and put it in front of 4720 for a while — and then when we completed 4610, we moved it over here.

And what did that process entail?

J: We actually used a little pickup truck to carry all the little letters back and forth. But each move cost over a million dollars. And some of the parts fell in the river — and we had divers go down to get it…

How did that happen?

J: They would lay the pieces along the waterway while we were working on the sign’s supports. They don’t know exactly what happened — it was either too windy, or vandals came along. But some of the little pieces — like the dot over the “i” — ended up in the East River. But obviously those bits have been rescued, and the sign is now in its final spot. Public and outdoor space are also major components of East Coast LIC — do the buildings have individual outdoor areas, too?

Do you have any other major projects on the near-horizon in the boroughs? What year do you expect to finish your buildings at Hunter’s Point South?

How tall will 33 Bond be, and how far along is planning?

J: 25 floors. It’s not so much a tower, but it’s very large, and really enhances the street-wall. We’re actually done with planning, and that site is now moving into demolition and construction. That building will have 714 units, and 20% will be affordable. You also have a project at 606 West 57th Street — how many units is that going to have? I thought it was going to be the largest building in Manhattan — 1180 units, if I recall?

S: We dropped the total. And that just recently completed ULURP, so everything is a go for that project. Though we’re still about two years away from construction. Overall, we have a lot happening in the near future, and it’s truly an exciting time for us.