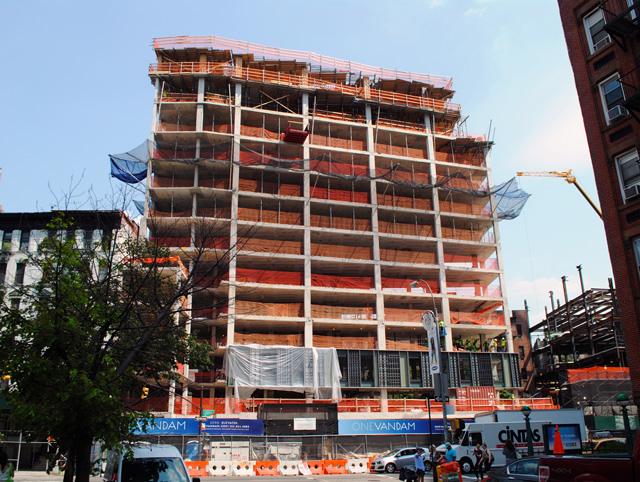 Quinlan Development Group’s project at One Vandam has made quick headway, and the future 14-story structure is already close to topping-out. BKSK is the design architect, and the site is located at 180 Avenue of the Americas, just north of Spring Street. Besides all the concrete, the first of the project’s cladding has also arrived, and glass installation is now underway. Stonework appears to be missing from the picture — and that component is what will ultimately distinguish One Vandam — but pane by pane, progress is happening, and One Vandam’s skeleton should not remain exposed for long. The development is rapidly coming together, and its relatively large scale compared to the rest of the neighborhood gives it local visibility. With excellent transit access, much of Soho could and should accommodate denser residential buildings, but down-zonings have left capacity limited.

Curbed reported that the triplex was on sale for $28 million last September, and the development only totals 25 units, placing it firmly in the ’boutique’ category. Given the demand for neighborhood real estate, as well as constraints on new construction in Soho, the extreme pricing comes as no surprise. Across the street, One Soho Square is also beginning to take shape, and the neighborhood is emerging as a vibrant district for both residential and office use. Surrounding blocks are currently seeing a mini-boom, with the God’s Love redevelopment also rising just to the south of One Vandam.