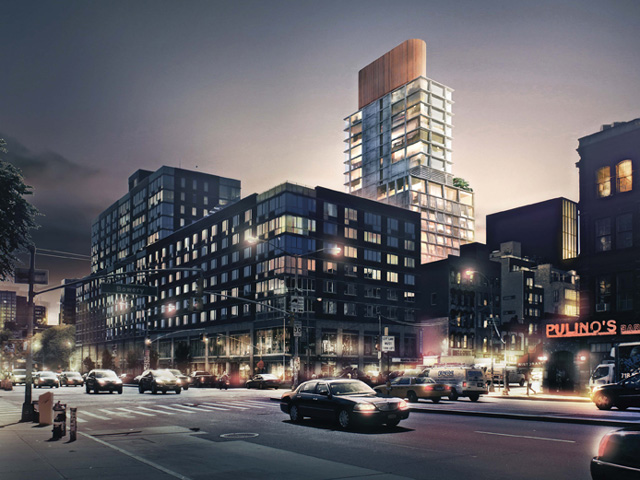 A helpful tipster has sent along a fresh set of renderings for the Herzog & de Meuron-designed 215 Chrystie Street, on the Lower East Side, which will likely become the neighborhood’s first iconic high-rise. Ian Schrager and the Witkoff Group are the developers behind the project, which will have a hotel on lower floors, and condominiums above. The 370-room hotel will rest beneath eleven palatial residences, split between half-floor and full-floor configurations. As the latest batch of renderings make clear, the ceiling heights on upper levels will be soaring, and proportions will be enhanced by floor to ceiling glass. 215 Chrystie will stand 28 stories and 314 feet tall. In terms of comparisons, Herzog & de Meuron’s 56 Leonard is already rising, and the architects have another project imminent at 357 West Street, where they are also partnering with Schrager. 215 Chrystie will be eye-catching in its own right, and the new images are the first to illustrate the sheathing that will hide upper mechanicals, ensuring the building’s pinnacle tops-off in a cohesive and attractive way.

Each of Herzog & de Meuron’s designs utilize a raw, concrete facade, though the developments will be differentiated by strikingly different forms; the Jenga-like silhouette of 56 Leonard would tower over the relatively angular 215 Chrystie, and 357 West Street is a departure from both high-rises, offering a softer and more flexible take on typical concrete rigidity. Per on-site signage, completion of 215 Chrystie is expected at the end of 2016.