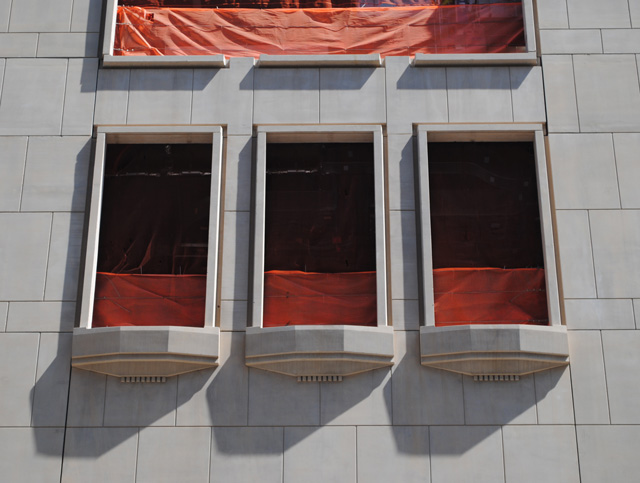 Silverstein’s 30 Park Place is once again making quick headway, after construction slowed down during the tower’s climb through its transfer floors, which separate the hotel and condominium portions of the future Four Seasons Hotel & Residences. As concrete has continued to rise, ceiling heights have dramatically increased, and the building is becoming much more prominent. Permits indicate the 67-story 30 Park Place will eventually stand 926 feet tall, and the structure is roughly at the halfway point in its climb. Next door, the Woolworth was once the tallest building in the world — from 1913 to 1930 — but the icon will soon be eclipsed by its neighbor, designed by Robert Stern. Besides continued vertical progress, facade installation has also sped up, and the pre-cast concrete panels are now evenly distributed across the lower levels of the tower, nearly encasing the first 20 stories. A tipster sent word that the upper residential levels will be clad in actual limestone, though whether that pans out remains to be seen. Regardless of any potential material change, as 30 Park Place has been sheathed in its casing, the concrete’s appearance has become much more cohesive, and it emulates limestone extremely well. The expansion joints between panels have become less visible, and the details along the base are also a nice touch, effectively interpreting pre-war ornamentation in a contemporary fashion.