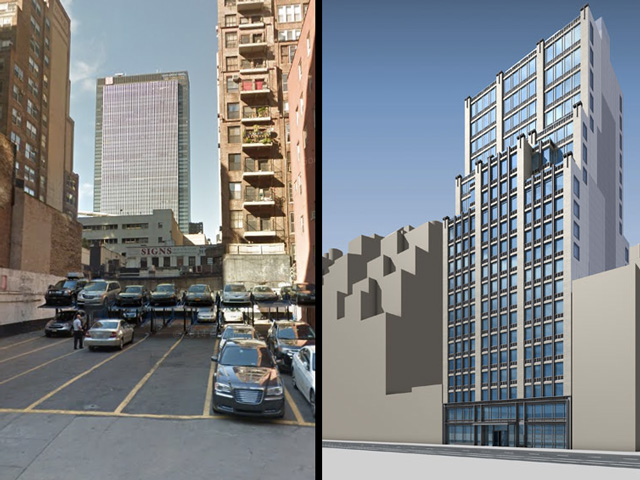 YIMBY has the reveal for a new building going up at 221 West 29th Street, in Chelsea, which Goldstein Hill & West is designing. CBSK Ironstate is the developer, and the first permits for the project were filed back in February.

While the initial documents indicated the height would be 15 floors, that number has seen an increase, and the building will actually stand 21 stories tall. A rep for CBSK Ironstate notes they must first complete the circuit through HPD before the amended application that incorporates the inclusionary housing bonus can be processed.

The old plan indicated a total scope of 57,419 square feet, but the structure will actually span 102,086 square feet, and have 95 units, 19 of which will be designated as affordable; the project will also include a small ground-floor commercial component. Goldstein Hill & West’s design is a fantastic replication of the kind of structures that characterize the majority of the surrounding neighborhood fabric, and at first glance, the rendering looks like something built before World War II. Indeed, 221 West 29th Street is essentially a residential, mid-block version of the pyramid-shaped office towers that developers threw up along the Garment District’s avenues during the roaring 20’s.

Pending administrative hang-ups, which are tying up the building process across New York City, CBSK’s revised plans likely to be approved, and the building will become a fantastic addition to the neighborhood. With tumor-laden deformities continuing to dominate new development in Chelsea, the proposal for 221 West 29th Street is especially welcome, and is hopefully a step towards turning the tide against architecture defined by a lowest common denominator. Once again, it is up to the city to encourage development that better needs the needs of the city, and re-zoning the entirety of northern Chelsea to accommodate high-density residential buildings should be a priority. Rewarding developers for attractive new structures is equally important, and reshaping policy towards guiding design rather than throttling progress would both promote growth and prevent ugly.

Talk about 221 West 29th Street on the YIMBY Forums