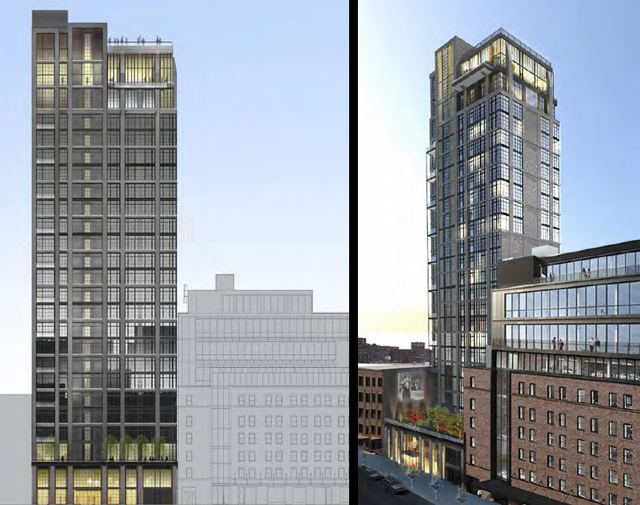 YIMBY has the first detailed look at the hotel coming to 414 West 15th Street, with new renderings offering a significantly better view compared to the bare-boned drawing attached to the site’s construction fencing. CetraRuddy is designing the 25-story and 285-foot building, which is about to begin rising across the street from Chelsea Market, between 9th and 10th Avenues.

The tower will be defined by casement windows and a simple facade, which appears to be composed of grey brick. Aesthetically, the project echoes the Viceroy on 57th Street, presenting another rare opportunity for a legitimately attractive hotel development in Manhattan. With 158 rooms and several event spaces — including one on the rooftop — the development will likely become a neighborhood destination. While the Viceroy does not impact the overall skyline, 414 West 15th Street will actually be somewhat significant, given its low-rise surrounds; views from the tower’s southern perspectives will be especially comprehensive. Chelsea Market was the subject of vicious rhetoric surrounding height, yet unbeknownst to the NIMBYs, an even taller development could be built as-of-right across the street.

This illustrates one of the chief problems with project-specific re-zonings, which are typically subject to inane opposition that ultimately hinders the growth of New York City. Luckily for 414 West 15th Street, the consequence of all the adjacent restrictions will be unobstructed views in every direction. Unfortunately, these limitations are precisely why rents in Manhattan —  for both commercial and residential properties — are spiraling out of control.

The Meatpacking remains severely underzoned for its true capacity, and as the neighborhood is serviced by several trains —  including the A, C, E, L, 1, 2, and 3 lines — it deserves the density it could easily support. 414 West 15th Street is a step in this direction, but barring sufficient political courage, the rest of the 14th Street corridor will remain underutilized. Per on-site signage, CetraRuddy’s latest creation — developed by The Rockpoint Group, Highgate Holdings, and Meilman Family Real Estate — will be completed in the summer of 2016.