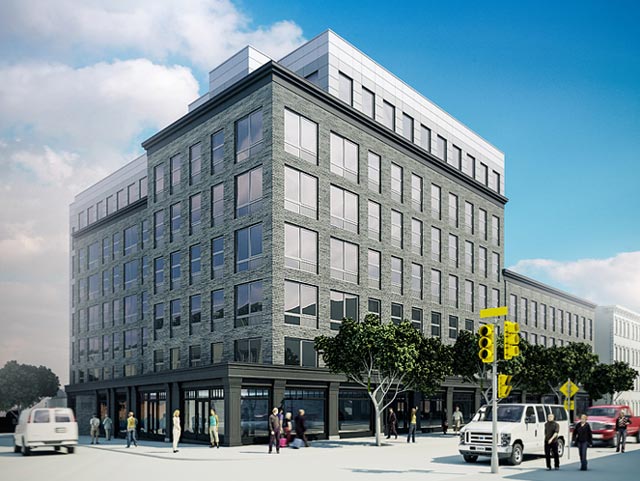 1511 Bedford Avenue [Brownstoner]: Demolition of the existing theater structure at 1511 Bedford Avenue, in Crown Heights, has completed, and excavation work is underway for a planned 10-story and 114-unit mixed-use building designed by Issac & Stern.

190 Bowery [New York Times]: RFR Holdings — currently in contract to purchase the dilapidated six-story building at 190 Bowery, in NoLita — has plans to convert the base to retail, with condominiums set to occupy the rest of the 38,000 square-foot structure.

31 Bond Street [Curbed]: The Landmarks Preservation Commission has approved the renovation and penthouse addition of an existing six-story townhouse at 31 Bond Street, in NoHo; the planned three-unit renovation is being designed by Matthew Baird.

450 Union Street [DNAinfo New York]: Akiva Reich’s Hospitality Group has plans to redevelop a portion of the vacant property behind the existing two-story building located at 450 Union Street, in Gowanus; the vacant parcel spans 17,000 square feet, but plans have yet to be disclosed.

823 11th Avenue [New York Post]: The six-story commercial property at the northwest corner of West 56th Street and 11th Avenue, on the Far West Side, is being marketed vacant for intended redevelopment. A condominium or hotel “ranging in size from 107,000 to 128,400 square feet, depending on bonuses and usage,” could be built on the property.

435 West 19th Street [Commercial Observer]: Six Sigma has “received a $29 million acquisition and construction loan” for their planned nine-story and 27,500 square-foot residential building at 435 West 19th Street, in Chelsea; an existing five-story building is being incorporated within the project.

250 South Street [Bowery Boogie]: Extell Development has filed applications for excavation and foundation work ahead of a planned 787-unit mixed-use skyscraper set for 250 South Street, in Two Bridges; the building’s pinnacle has also been revised up to 847 feet, standing 72 floors tall.

42-15 Crescent Street [The Court Square Blog]: Façade and window installation is currently underway at an 11-story and 124-unit mixed-use building at 42-15 Crescent Street, in Long Island City; completion is slated for next year, although construction appears to be ahead of schedule.

14 53rd Street [Commercial Observer]: Boddewyn Gaynor Architects is converting the seven-story and 400,000 square-foot warehouse building at 14 53rd Street, in Sunset Park, into commercial space. the building’s brick façade and glass is being restored, and the conversion has been underway for two years.