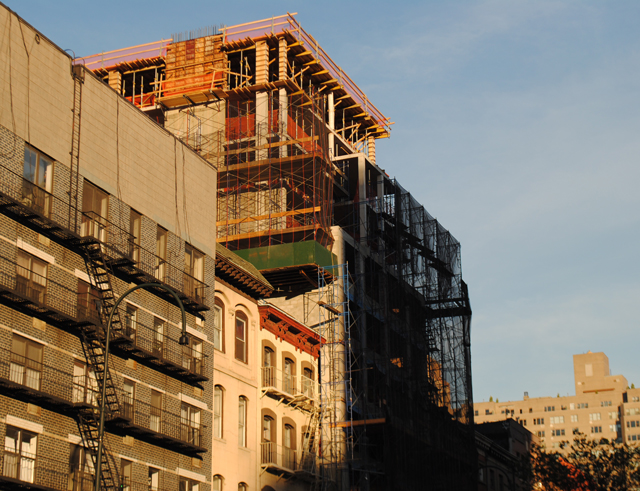 Last YIMBY checked in March, Alfa Development’s Village Green West — at 245 West 14th Street — was little more than a hole in the ground. Since then, construction has pushed rapidly ahead, and the structure has nearly topped-out. Kutnicki Bernstein Architects designed the soon-to-be 12-story building, which will span 47,000 square feet. That total includes nearly 4,000 square feet of ground-floor retail, as well as a minor community facility. The residential portion will be split between 27 units, averaging 1,500 square feet each. YIMBY has been an advocate of transformational rezoning for the 14th Street corridor, and 245 West 14th Street perfectly illustrates why this is necessary: a major cross-street with proximity to every subway line on the West Side is seeing new construction that is far smaller than existing buildings built 100 years ago. This is despite the dramatic improvements in transit access since the neighborhood was originally built out. If a structure is unattractive to begin with, age is not a value-add, which is why the context of Village Green West is so disappointing — and why the use of landmarking in the surrounding neighborhood is often excessive. Chelsea and the West Village certainly have blocks that are worthy of preservation, but those fronting 14th Street are almost totally devoid of character, excluding historic exceptions like 80-90 8th Avenue and distinctive modern additions like DDG’s 345 Meatpacking. Alfa Development’s contribution will certainly be attractive, evoking the aesthetics of pre-war Manhattan, but with only 27 units it will do little to dent demand for new residential space in one of New York’s most accessible locations.

Completion is expected in August of 2015.

Talk about 245 West 14th Street on the YIMBY Forums