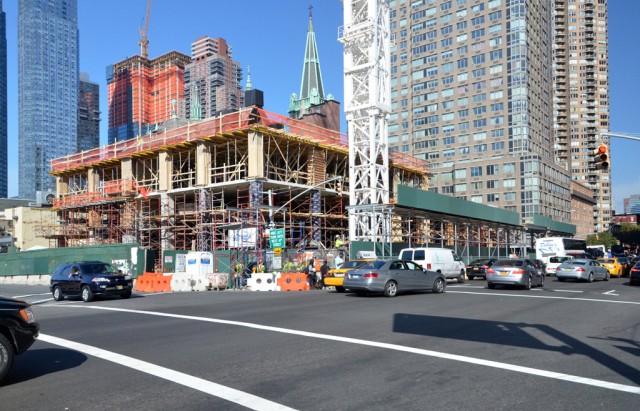 The West 42nd Street corridor’s mini-boom is quickly changing the neighborhood skyline, and 605 West 42nd Street is especially transformative. But on the corner of 40th Street and Tenth Avenue, yet another major rental tower is just beginning to rise at 551 Tenth Avenue, and a photo sent along by Tectonic shows the structure has now reached its third floor.

Extell is the developer, and the building will have 600 units, 20 percent of which will be set aside for affordable housing. Permits indicate the final height will be 52 stories, which is actually relatively short when compared to the larger projects going up on the Far West Side. In addition to the apartments, The Commercial Observer reported that the tower will also have a 300-bed dormitory spanning floors two through seven. Taller towers are in the works in almost all directions, so 551 Tenth Avenue seems destined for filler status, but in the meantime it will greatly benefit a corner that was formerly bereft of human activity. The neighborhood is currently a warren of access ramps for the Port Authority Bus Terminal and the Lincoln Tunnel.

Luckily, the cavern for another stop on the 7-train has been excavated at 41st Street and 10th Avenue, and if it could be completed, the area could easily support residential densities above the state’s current limits on FAR. The lack of almost any existing neighborhood fabric also allows for new construction with relatively little political opposition, and projects like Silverstein’s 520 West 41st Street could bring an end to New York’s affordability crisis, if they could be replicated on a larger scale. Unfortunately, the web of roads that link the Port Authority and the Lincoln Tunnel choke pedestrian access, and remain a significant barrier to the neighborhood’s true potential. Resolving this problem is just as important as completing the build-out of the 41st Street 7 train stop, and it could require a Hudson Yards-esque undertaking of its own, offering density bonuses commensurate to the difficulty of the undertaking.

Piecemeal infill like 551 Tenth Avenue is nevertheless beneficial, and completion of the project, where foundation work began about six months ago, is expected in June of 2016.