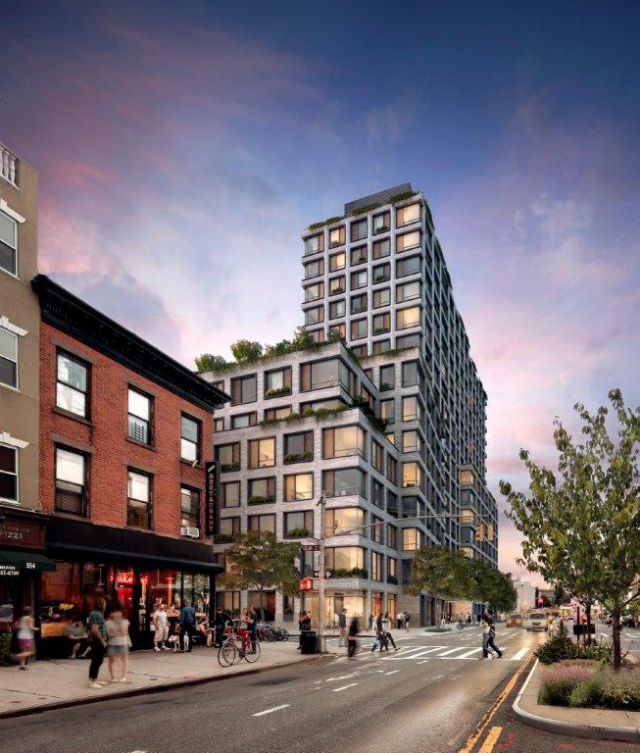 Pacific Park Brooklyn has gone through its share of ups and downs, and not a few design revisions – from the post-quake Frank Gehry original and more manageable SHoP designs (both back when it was still called Atlantic Yards) to, finally, the COOKFOX designs that look like they may finally be the last.

SHoP’s modular tower (461 Dean Street, once called B2) has started construction, and 30 Sixth Avenue next door is slated to break ground by the middle of next year. The first COOKFOX design – for another all-affordable tower at 535 Carlton Avenue – was revealed in August, when the Pacific Park name was announced, and will break ground by the end of this year.

And now, YIMBY has the pleasure of presenting you with the first renderings of 550 Vanderbilt Avenue, a 17-story condo tower planned for the corner of Vanderbilt and Dean, on the edge of the 22-acre site. Greenland Forest City Partners – the joint venture recently forged between the Chinese developer that bought into the project and the Brooklyn-based firm founded by Bruce Ratner that started it – will host an introductory event for Pacific Park and 550 Vanderbilt in Shanghai this week, coinciding with the Brooklyn Nets’ upcoming exhibition games against the Sacramento Kings, also in Shanghai.

COOKFOX will be designing the 275-unit condo tower, which will feature a mix of studio through three-bedroom apartments. The façade will be a mix of masonry and precast concrete, for a more traditional look than the Gehry and SHoP designs. It should fit in nicely with the brownstones of Prospect Heights, offering a gradual aesthetic transition towards the more modernist SHoP towers of the western end of the site and in downtown Brooklyn proper.

The lobby rendering also shows that the developer is making good on their pledge to make the interior public space – the “Pacific Park” after which the development has been branded – as accessible to the public as possible, with the greenery of the park clearly visible through the lobby entrance.

Groundbreaking for 550 Vanderbilt is set to occur by the end of the year, with sales starting mid-2015.