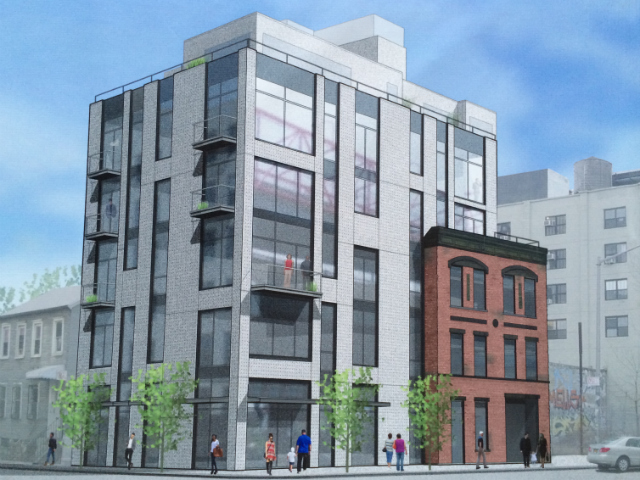 The Jamaica Line in Brooklyn is buzzing with construction, as northern Brooklyn’s developers venture outside of the familiar L train territory to start building along the J, from Williamsburg through Bushwick. The most prominent project is Morris Adjmi’s 282 South 5th Street, whose construction can be observed from the Manhattan-bound platform at Marcy Avenue, but a few blocks closer to the water there’s another project that looks poised to start rising: 95 South 5th Street.

At the corner of Berry and South 5th, Horrigan Development is building a six-story, 23-unit apartment building, for which a rendering was recently spotted on the construction site by a YIMBY reader. There will be nearly 18,000 square feet of net residential space, plus a small 675-square foot commercial space (the Schedule A calls it an “eating and drinking establishment”) at the base.

The building is being designed by Standard Architects – an architectural practice based within walking distance, on Hope Street – and its most notable feature is the retention of a prewar industrial building on the corner, currently painted bright red. While most developers would raze the old structure, which is not landmarked, Horrigan has decided to integrate it into their new building – a welcome decision that will retain a bit of the neighborhood’s built industrial heritage, while also allowing it to grow to meet (at least some of) the new demand for housing. While YIMBY is of course glad to see any construction in this corner of Southside Williamsburg, which had until recently been passed on by developers in favor of the hipper parts of the Northside, the low density is unfortunate given the prominent location and the extra capacity on the J/M/Z trains.

Not only does the presence of the clanging elevated line rising to meet the Williamsburg Bridge moot any concerns about nuisance from a mere apartment building, but the neighborhood’s prewar context is in many cases denser than the current M1-2/R6 zoning allows. On this same block and a number of blocks around it, one can find old industrial buildings that have at least twice the bulk as would be allowed today, as in the background of the above photo – an object lesson in northern Brooklyn’s skyrocketing housing prices.