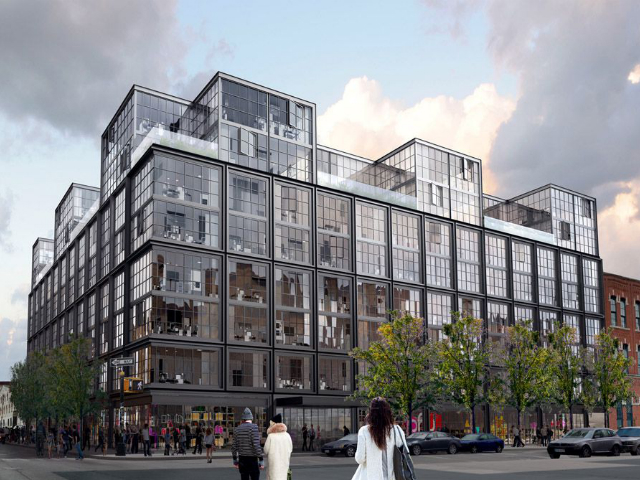 Update: We’e since learned that the historic brewery building will be maintained and redeveloped by a separate developer, and have updated the article to reflect that.

In the past few years, real estate in Crown Heights – and especially its northeastern quadrant – has soared in popularity. Riots have given way to rapidly rising rents, and the neighborhood is hitting real estate milestones left and right. Just this year, we’ve seen a $1,000-a-foot condo on Classon Avenue, a new rental building at 341 Eastern Parkway with a Starbucks and studio rents starting in the $2,000s, and the opening of a beer hall and mini-food court called Berg’n (owned by Jonathan Butler, of Brownstoner/Smorgasborg/Brooklyn Flea fame).

And now, YIMBY’s got the first look at the next milestone for northwestern Crown Heights’s main drag, Franklin Avenue: an eight-story, 130,000-square foot apartment building designed by Eran Chen’s ODA Architecture, which will soon be rising at 608 Franklin Avenue, on the corner of Dean and Franklin.

The units appear to be rentals (120 studio through two-bedroom apartments spread over 82,000 square feet of residential space), but the quality seems to be even higher than most new condos built lately throughout Brooklyn. ODA’s signature strongly gridded, clean façade, and boxy protrusions are 608 Franklin’s most notable feature, expressed here through setbacks to form balconies. But YIMBY also appreciates the developer’s willingness to go with more efficient and less obtrusive air conditioning, rather than the standard PTACs that too many rental builders punch through the faces of their buildings.

The building will be developed by Brooklyn GC, led by Yoel Goldman. The builder is capitalizing on Franklin Avenue’s rise as a trendy commercial strip (it’s on the same block as Berg’n) by including nearly 19,000 square feet of retail space. Old structure, which will be maintained by a separate developer

The broader area of northwestern Crown Heights was rezoned in late 2013 to accommodate more development in parts, and restrict infill densities elsewhere. But this particular project was actually enabled by a spot rezoning a decade earlier. In 2004, a developer won a rezoning of the old Nassau Brewery (and later Heinz factory), to “facilitate the conversion from manufacturing to living/work studio space for artists.” The zoning change was granted, but that particular project was never built.

Crow Hill Development, which once owned the entire site, eventually sold two-thirds of assemblage site to Brooklyn GC, to be redeveloped into the ODA project. However, they kept the historic buildings and will be rehabilitating them into a mixed-use rental building, to be revealed at a later date.

The developer of 608 Franklin Avenue will be setting 20 percent of the units aside to be let at below-market rates. Still, the building will likely attract criticism from groups worried about gentrification, like the rising Crown Heights Tenant Union.

YIMBY is also concerned about the declining affordability of New York City, but the blame should not be heaped on developers of what little new housing still gets built. Politicians and planners are the root of the problem, and from Greenwich Village to Park Slope, these people shirk their responsibility to house New York’s wealthy newcomers in more desirable, closer-in neighborhoods, where ample infrastructure for additional density already exists.