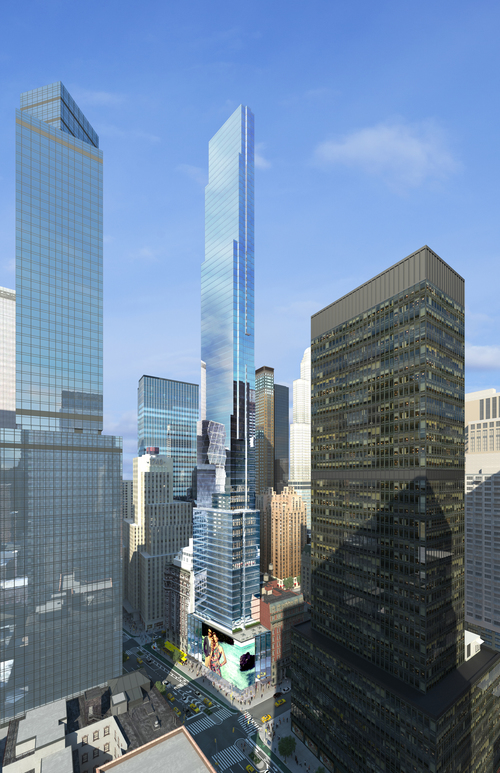 Broadway’s path through Midtown cuts through some of the densest real estate on the planet, and another property may soon add to the skyscraper forest that surrounds one of New York’s most renowned thoroughfares. YIMBY came across the first renderings for a potential tower coming to 1710 Broadway, on the northeast corner of West 54th Street, which could also become the street’s first actual supertall, potentially topping the 1,000-foot mark.

While the developer has not been revealed, the existing building — currently the office of Sean Combs — was reported to be coming back on the market in 2012. That opens the possibility that redevelopment may not occur, but the Municipal Art Society’s “Accidental Skyline” map reveals approximately 350,000 square feet of unused air rights within the surrounding block. That number is one of the highest totals along Broadway, and would invite the possibility of a tower like the one depicted in the renderings, which stands approximately 80 stories tall. Goldstein Hill & West is the architect, and could not be reached for comment.

The program allows for a wide mix of uses, with retail occupying the first few floors. Hotel and residential would likely sit above the base, and the rendered design is typical of New York’s new residential skyscrapers, employing a simple glassy aesthetic. If built, the target market would likely be lower-end than similarly-sized towers along 57th Street, given 1710 Broadway’s location, which verges on Times Square. Besides the structure’s sheer verticality, its presence on the street would also be significant, and the developer is allowed to cover the first few floors in LEDs. Neighbors like 1717 Broadway and the new CitizenM show that hotels are moving north, but 1710 Broadway could be the first of the group to employ high-wattage signage along its base.

The potential at 1710 Broadway also shows how quickly the surrounding neighborhood has evolved in recent years. Across the street, 1717 Broadway became the tallest hotel in the Western Hemisphere when it topped-out in 2012; 250 West 55th Street and another hotel at 237 West 54th Street also opened last year, transforming nearly an entire city block.

1717 Broadway is especially notable because height is usually associated with luxury in New York City. In fact, the city’s tallest all-hotel building hosts a Marriott Courtyard and a Residence Inn, both of which are budget-friendly. As the Nobutaka Ashihara-designed tower shows, not all skyscrapers must be for the uber-rich, and cost is simply a function of insane demand that existing supply cannot satiate. Manhattan can certainly build to meet this demand, as it did before 1961, but legislative burdens — placed on the island when both local and national governments were actively trying to kill cities — must first be removed.

Mass-market supertalls are beginning to become cost-feasible, and projects like both 1710 Broadway and 520 West 41st Street show how planners must rethink urbanity. Ultimately, New York City continues to grow as it has for the last 150 years — upwards.