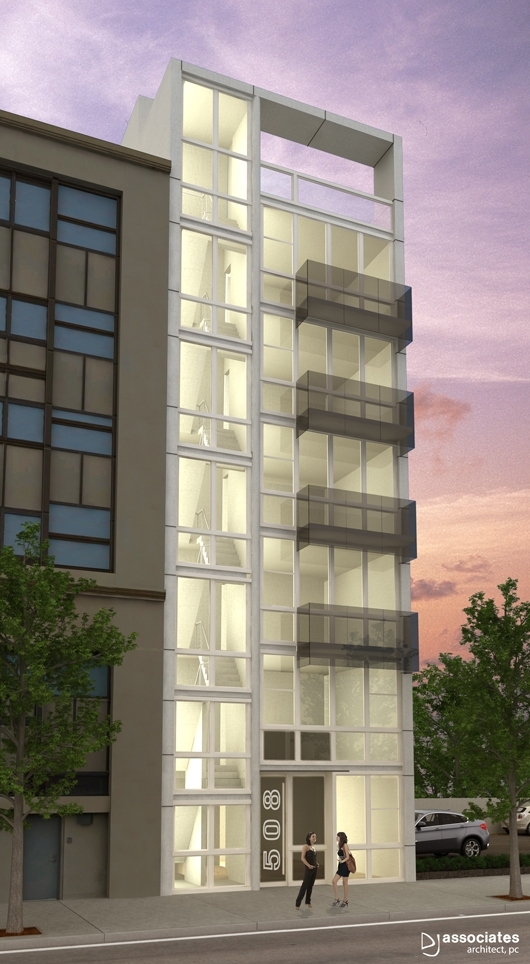 As Clinton Hill makes the transition from gentrifying fringe to solidly prime Brooklyn neighborhood, condos are starting to displace rentals as the residential product of choice for developers. Condos come with heftier price tags, but also higher quality design, as evidenced by 508 Waverly Avenue, a small infill project whose rendering YIMBY has obtained.

The six-story building will have six full-floor units, each with a very reasonable 1,100 square feet of floor space, according to a new building permit application filed in late December.

DJ Associates, led by David Shteierman and based in the Financial District, is responsible for the sleek, glassy design, with a clean façade unsullied by the PTACs of cheaper rental projects nearby.

The project is being built by Bonjour Capital, led by Syrian Jewish developer Charles Dayan. His earlier ground-up projects nearby include two larger rental buildings – 333 Greene Avenue in Bed-Stuy, and the 13-story 525 Clinton Avenue just a block to the west.

In 2014, a few new condos in the area sold for around $1,000 per square foot, and if construction at 508 Waverly begins soon, we expect these units to easily fetch four digits by the time they’re sold.

The site is currently occupied by a two-story brick commercial building, for which a demolition permit was filed in September.