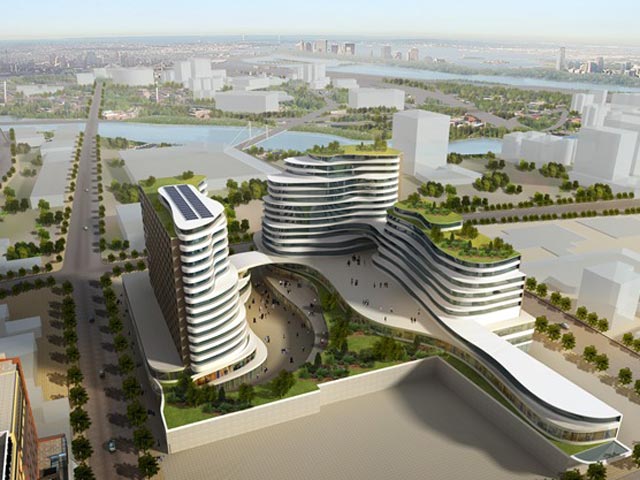 Flushing Mall at 133-15 39th Avenue, with one of the neighborhood’s bustling food courts, had been on its last legs for years, ever since it was reported to be closing in 2011 to make way for parking for Flushing Commons. That didn’t happen, but the new Flushing food court at New World Mall on Roosevelt Avenue did appear to siphon away a lot of customers and businesses, and the old Flushing Mall apparently closed earlier this year, after a decade and a half of operation.

Now, a filing with the Department of Buildings reveals the fate – or, well, one part of the fate – of the massive piece of land in downtown Flushing: a large, 13-story residential building. According to an application submitted this morning, prolific Flushing developer F&T Group – responsible for Flushing Commons and One Fulton Square – is planning a 192-unit residential building for the oddly shaped site, taking up most of the block bounded by College Point Boulevard, 37th Avenue, Prince Street, and 39th Avenue (and in fact fronting on at least a little bit of each of those streets).

The filing appears to be for just one phase of the larger Two Fulton Square project, which was planned to have condos, retail, office space, and a hotel, and for which YIMBY obtained a conceptual rendering earlier this year. In September, a first application was submitted for a larger project on the same site, with nearly 370,000 square feet of residential space, more than 350,000 square feet of commercial, and a 33,000-square foot community facility space, along with 520 parking spots. We’re not sure if this latest filing is part of that, or would come in addition to it, though the former seems more likely.

The phase indicated on today’s filing would include 192 housing units spread over 190,000 square feet of residential space, ranging from large duplex units (six spanning floors 12 and 13, at the top of the building) to smaller apartments (21 apartments per floor from the second through fourth floors). The Schedule A filing also mentions retail space in the cellar, however there is no commercial component indicated on this application. (The filing points to a different application for the required parking, and indeed yet another application was filed earlier this year for a 377-space underground garage.)

Margulies Hoelzli Architecture is the designer.