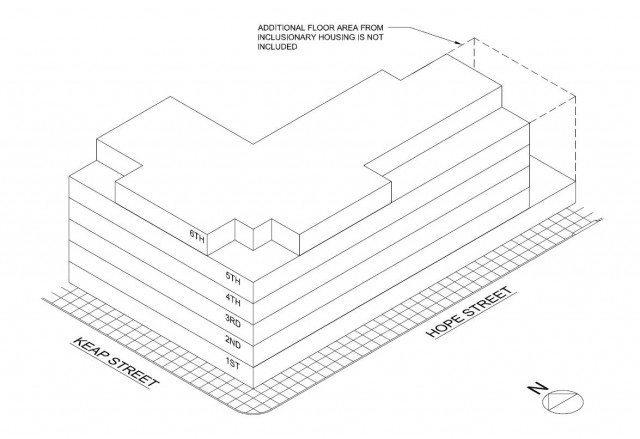 Williamsburg is thick with new construction, following the 2005 rezoning of the North and Southsides of the neighborhood. But aside from the waterfront, the area most dense with new development may be a formerly industrial corner just east of the Brooklyn-Queens Expressway, bounded by Borinquen Place (which turns into Grand), Union Avenue, and Metropolitan Avenue.

That area was rezoned from a low-density manufacturing (well, “manufacturing”) designation to allow mixed-use, mid-rise-scale redevelopment, which barely took a breather during the recession, and is now revving back up in earnest, almost entirely in the form of high-end condos. The 38 condos would be spread over more than 45,000 square feet of residential space, for a roomy unit average of nearly 1,200 square feet. The apartments will be perched over a small 1,600-square foot retail space, with 19 parking spaces (the minimum required by code) in an open space at ground level.