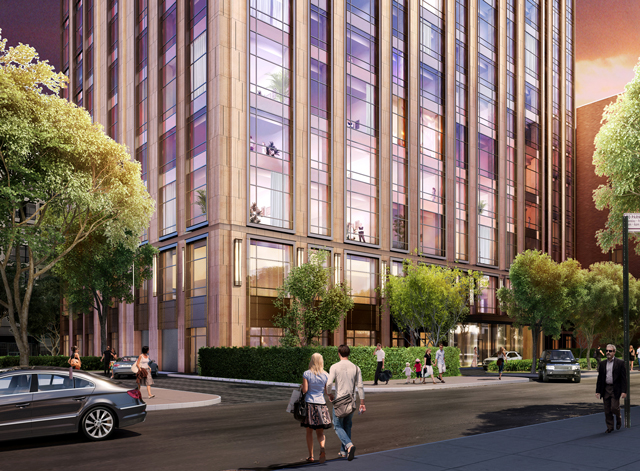 Yesterday YIMBY revealed a major redevelopment for Mary Immaculate Hospital in Queens, and today we have the reveal for another hospital conversion project, this time for the old Cabrini Medical Center, which spans 224-228 East 20th Street in Gramercy. The project occupies a block-through lot and also has the address of 209-225 East 19th Street, and the Chetrit Group and Clipper Equity are the developers; since it was announced, the development has also assumed the moniker of Gramercy Square.

Curbed posted an early look back in late 2013, which featured the project’s first on-site renderings, but its appearance has apparently seen revisions since then. Woods Bagot is the architecture firm responsible for the design, and the plan should result in the transformation of an old eyesore into something that adds to both the streetscape and the local skyline. The old Cabrini Medical Center closed back in 2008, and its conversion into apartments represents a natural transition for the hulking structure; similar projects are underway across New York City, and a mile or so to the southwest of Cabrini, the Greenwich Lane is rising on the site of the old St. Vincent’s Hospital.

Like the Greenwich Lane, Chetrit and Clipper’s undertaking will also include several buildings of varying sizes, and in Cabrini’s case, there will be four. The largest, at 209-225 East 19th Street, will have 140 units and will stand sixteen stories tall; two buildings at 228 East 20th Street and 227 East 19th Street will also have 54 units apiece, while the smallest component will be 224 East 20th Street, with just eight full-floor apartments. The largest part of the project — at 209-225 East 19th Street — is also set for the most dramatic exterior changes. Woods Bagot’s plan will replace the structure’s tiny windows and overbearing facade with enormous panes of glass, and what look to be a mix of limestone and brick. Plans for the other three components aren’t nearly as dramatic, and 228 East 20th Street will be the only part built from scratch. DOB permits for the project have mostly been secured, and demolition permits for the old 228 East 20th Street were submitted last May. Completion is tentatively slated for 2016.