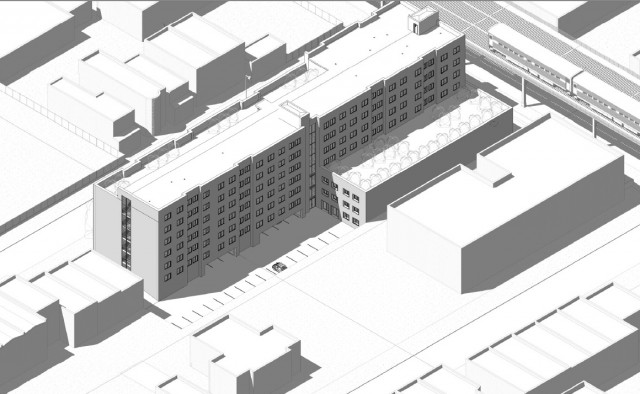 Back in November 2012, plans were announced to redevelop the former Our Lady of Lourdes convent in Bushwick into a mixed affordable/supportive housing project.

Now, more than two years later, the plan is moving one step closer to fruition, with a permit filing over the weekend for the project, which will include both a rehabilitation and expansion of the existing building at 1 DeSales Place, as well as a new building developed on the same site. The project is located on the Bushwick side of Broadway, a block from Eastern Parkway and not far from Broadway Junction.

The new building permit calls for a new eight-story, 70-foot-tall residential and community facility building. There would be 18 apartments spread over 21,500 square feet of residential space (for an average unit size of 1,200, perhaps the three-bedroom units mentioned in 2012), along with a 7,000-square foot community facility space, reaching from the cellar through the second floor. The second filing is an application for an alteration permit, bringing the existing structure at 1 DeSales up from four stories to six. The enlarged building would hold 58 units spread across 49,000 square feet of residential space (presumably holding the supportive housing units, which will be studios, along with the remaining affordable apartments), along with 1,215 square feet of community facility space on the first floor. An open space with room to park 14 cars would also be included.

The developer is Georgica Green (on whose website YIMBY found the drawing above), working in conjunction with the Ridgewood Bushwick Senior Citizens Council, founded by former politician Vito Lopez. They purchased the property in a sale that closed this year for just $1.8 million. OCV Architects is responsible for design.