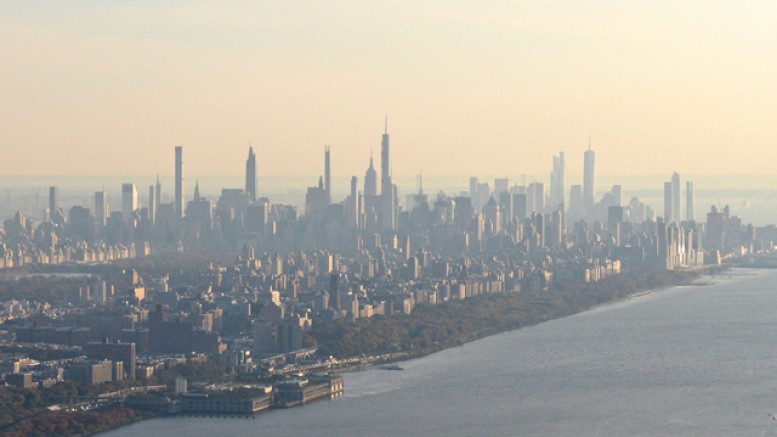 NYC Skyline in 2023, image by Voltage

If the previous year’s increase of 52,700 people is matched in 2015 — and given construction permits, an even larger jump this year would not be surprising — New York’s population will pass the 2020 estimates within the year, if it has not already.

When looking for hope from a worsening housing crisis, there appears to be none. City planning is considering abolishing parking minimums beyond the cores of Manhattan below 96th Street, Downtown Brooklyn, and Long Island City, but only for affordable units — a nonsensical policy that should also apply to market-rate development, which makes up the vast bulk of new construction, and which has equally little need for parking.

Market-rate housing at affordable costs is a clear and viable solution to New York City’s crisis, and while it isn’t being built in Williamsburg or Gramercy, brand new two-bedroom apartments are available starting at $1,700 a month in the Bronx. Removing obstacles to construction in now-gentrifying neighborhoods can prevent the price spiral that has enveloped Manhattan and much of inner Brooklyn, as redundant community controls tend to choke off development once gentrification begins accelerating.

While large-scale injections of new supply would not result in immediate relief, opening the pipeline to substantially more development would at least stymie continued increases in rents over the long-term, as demand is satiated. Housing also filters down to lower income brackets as it ages, though this process is also dependent on time.

Meanwhile, New York City is growing far faster than anyone had planned for, although hopefully that will become a catalyst for removal of local politicians who have become calcified to the city like old barnacles. Instead of searching for solutions to the problem of skyrocketing housing costs, politicians are suggesting blatantly racist housing solutions, or asking to spend money on task forces relating to shadows in Central Park, an issue that was settled with the construction of the Plaza Hotel back in 1907 (a structure whose net sum of shadow over Park is far greater than the combined addition of all the super-slender 57th Street towers).

If the latest Census estimate is indeed accurate, New York City is probably over 8.5 million people as of today. With the urban renaissance now in full swing across wide swaths of the city, development pressure will continue to skyrocket. And if 2010-2014’s rate of increase is replicated through 2020, the city will pass the previous 2030 population estimate as early as 2019, reaching approximately 8.85 million people.

That number is over 300,000 people higher than the city’s current 2020 forecast, yet even today New Yorkers must endure an overburdened infrastructure mismanaged by the bloated Port Authority and the completely non-transparent MTA. When asked how much the Second Avenue Subway would cost, current MTA head Tom Prendergast once told Capital New York “A billion is a thousand million, and a trillion is a thousand billions.”

The people of New York City are its greatest asset, but those occupying local and city leadership positions are its greatest liability (though a few bright spots exist in figures like Brooklyn Borough President Eric Adams, and we also hold hopes for De Blasio and an even more aggressive housing plan). With the latest Census estimates showing the city growing by 315,946 people in only four years, the housing crisis and the city’s overburdened infrastructure are only going to keep getting worse — unless there is rapid and exceptional political change, which is what this city needs most.