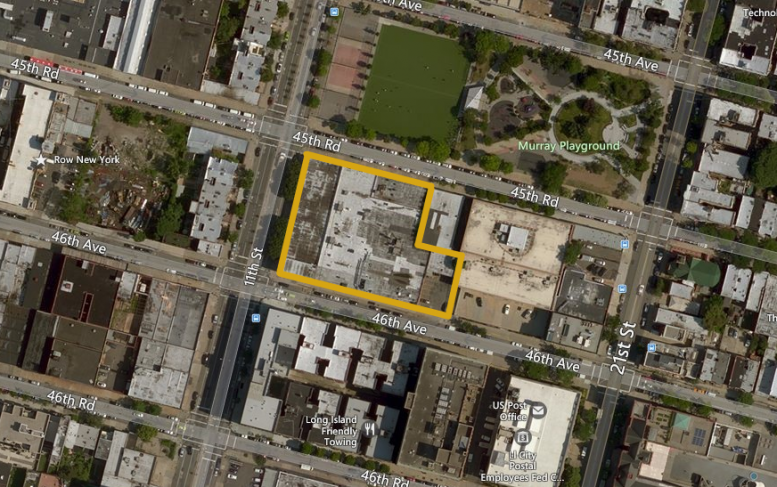 Long Island City’s mixed-use zoning has produced high rises filled with apartments and offices, as well as plenty of smaller residential buildings with ground-floor commercial space, but now the industrial neighborhood might get its first crop of new townhouses in half a century.

Plans were filed on Friday for 12 two-family townhouses at 45-35 11th Street, a couple blocks from the Court Square subway stop. They’ll replace a series of one- and two-story factory buildings that stretch from 46th Avenue to 45th Road and occupy roughly half the block between 11th Street and 21st Street.

Every four-story home will have a cellar and a duplex on the first two floors, topped by a triplex. The construction floor area of each house will be 4,470 square feet, according to permits, and the whole development will span 140,272 square feet.

GDC Properties, which is the investment arm of Valhalla-based Ginsburg Development Companies, is the developer, and Newman Design Architects will be responsible for the design. The firm mostly builds in Westchester County, Connecticut and the Hudson River Valley (like this Hastings-on-Hudson project YIMBY revealed last week), but they did convert a warehouse to rentals at 220 Water Street in Dumbo a few years back.

Although spec townhouse developments have grown throughout Brooklyn’s established residential neighborhoods, this is the first one we’ve ever seen in Long Island City. We’re interested to see what the asking prices will be for a new construction townhouse in the area, since older ones with upscale renovations are clocking in as high as $974 per square foot.

While he couldn’t give us many details, GDC co-chair Adam Ginsburg told YIMBY in an e-mail, “Our aim is to cater to renting families, a cohort that is often overlooked by much of the new apartment construction.”

GDC picked up the two industrial properties last October for $37,000,000, the Observer reported at the time. Construction is expected to take about 18 months, and demolition applications have been filed, but not yet approved.