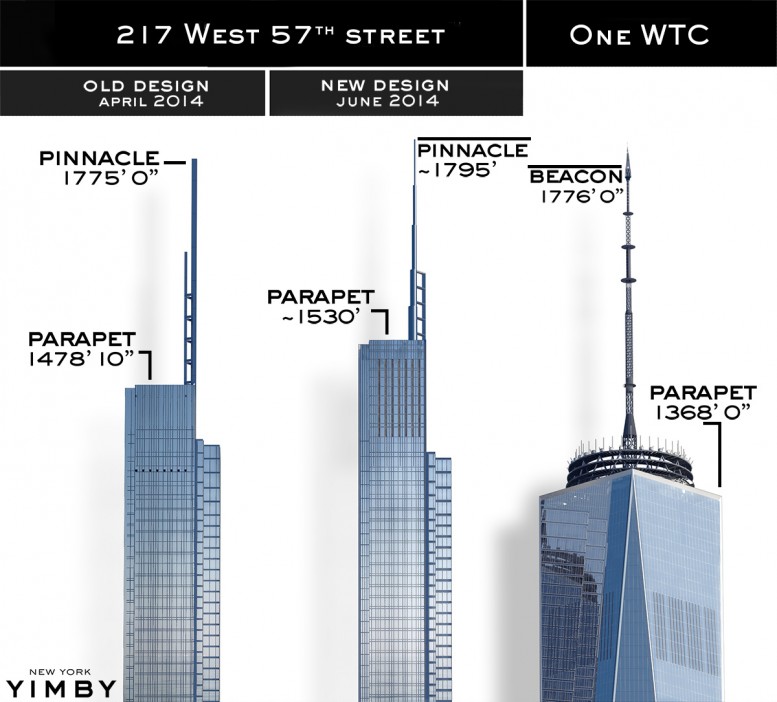 The current race to the top of the skyline is the most impressive in New York City’s history, with ever-taller skyscrapers sprouting from the Financial District all the way to 57th Street. And YIMBY has now learned that 217 West 57th Street, aka the Nordstrom Tower, received a height boost between April and June of last year, pushing the tower’s pinnacle to 1,795 feet. That will make it the tallest building in New York City, the United States, and the Western Hemisphere.

While the spire was only increased 20 feet, the difference is significant because the old plans were just one foot shy of One World Trade Center’s beacon, which stands 1,776′ tall. The boost to the Nordstrom Tower’s parapet was more significant, and it rose from 1,478’10” to 1,530′, which will further bolster the tower’s profile on the already-enormous Midtown skyline. Extell’s extreme secrecy regarding the project helps explain the discrepancy in the plans, and Smith + Gill’s involvement should have also been foretelling of the increase. The height of the firm’s largest completed project to date, the Burj Khalifa, remained a secret until it had been completed, and the final height of the Kingdom Tower, currently under construction, is still unknown.

There is also a significant precedent for discretion when it comes to height in New York City, echoed in the city’s previous building booms. At the end of the 1920s, 40 Wall Street had just reached its 927-foot pinnacle when the Chrysler Building’s architect William Van Alen had a spire secretly constructed and raised to the top of his nearly-completed Midtown creation, pushing its height to 1,046 feet above street level, and giving it the title of the world’s tallest building.

Perhaps it is not so surprising then that New York’s current supertall boom is following a similar pattern, with another Midtown skyscraper set to grab the city’s top position from a newly-constructed Downtown rival (though if Silverstein is serious about Bjarke Ingels designing 200 Greenwich, perhaps One World Trade Center doesn’t have to be the tallest building in the complex after all, especially as its “iconic” pinnacle is already rather ordinary in terms of global tall building rankings).

Continued tweaks at 217 West 57th Street would seem likely, but there is no reason it wouldn’t remain in the stratospheric air above One World Trade’s parapet, likely within a hair of the 1,800-foot mark. With the controversy surrounding One World Trade Center and its rivalry with the Willis Tower in Chicago, a new building that handily trumps both in terms of roof and spire height will resolve the debate surrounding the title of the country’s tallest building once and for all. YIMBY’s in-house illustrator Jose Hernandez created the new renderings based on the updated schematics, which are posted below. Besides minor shifts already mentioned, the design appears to have stayed fairly constant from renderings YIMBY had previously posted. The version YIMBY obtained most recently (created in-house at Smith + Gill) was created last summer, and also based on the newer schematics from June.

The roof height of the tower’s uppermost 93rd floor remains unchanged between both versions at 1,428’10”.

Permits for 217 West 57th Street do not appear to be accurate, and the most recent filings for the plywood fencing and sidewalk shed note a height of only 880 feet and 88 floors. This is the same thing that Related did with permits filed last summer for its 1,269-foot tall 30 Hudson Yards, when filings only indicated a height of 66 floors and 660 feet, and the tactic is not uncommon for high-profile projects. DOB permits also do not account for anything above a building’s roof height, so even the final job application figures could leave out the actual pinnacle height.

Despite the lack of transparency at the administrative level, work is making significant progress on-site, and concrete for the tower’s foundation has been pouring for months. It will likely be another several months before the superstructure climbs above street level, but within the next year or so the structure will be visible from surrounding blocks, and it will open its doors in 2018.