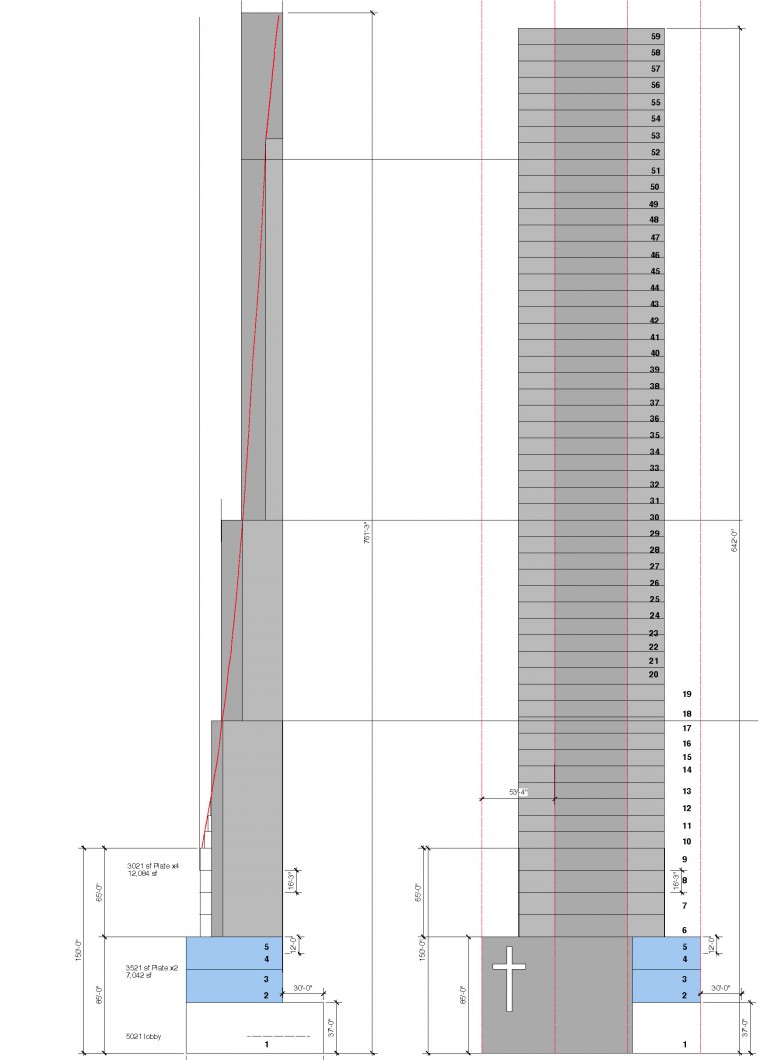 The current crop of supertalls at 111 and 217 West 57th Street aren’t yet above ground level, but Extell is already in talks for their next major development along New York’s newly-minted Billionaire’s Row, at 123 West 57th Street. YIMBY’s sources confirm that the firm has emerged as the finalist in talks for the site, comprising the Calvary Baptist Church and the Salisbury Hotel, and we have also procured massing diagrams produced by another developer that was formerly in contention for the building.

YIMBY’s source notes that Extell’s advantage comes from a small amount of unused air rights leftover from One57, perhaps indicating that Gary Barnett has planned another tower on the block for quite some time. While exact numbers are not known, the firm had several tens of thousands of square feet leftover, and on a site as limited as 123 West 57th Street, that can translate into significant additional revenue. Crain’s also reported that the firm owns additional adjacent lots earlier this month.

The same block was the first on 57th Street to host any sort of supertall, with One57 finally opening last year. 111 West 57th Street will soon become the tallest on the block, standing 1,421 feet to its roof, over 400 feet above One57. And one block to the west, 217 West 57th Street will be even taller, with a spire approaching the 1,800-foot mark. Relatively limited air rights at 123 West 57th Street — even with Extell’s FAR leftovers — mean that any new tower is unlikely to achieve stratospheric heights. The massing diagrams obtained by YIMBY show a height of 59 floors and 761 feet, though it’s possible that re-configuring the envelope and allowing for additional air rights could boost the tower to the 1,000-foot level.

If Extell can amass over 300,000 square feet of air rights, the potential is there for something that alters the neighborhood skyline. 111 West 57th Street’s early plans could also be a good comparison, as that building initially started out at a size similar to the current massing diagrams, in plans created by CetraRuddy and revealed by YIMBY back in 2012.

The fate of the current building at 123 West 57th Street is unknown, but the plans obtained by YIMBY appear to call for its demolition, with a new church taking the place of the old in the base of the new tower, which would also feature a minor cantilever.

No architect has been publicly attached to the project as of yet, nor is any expected completion date available.