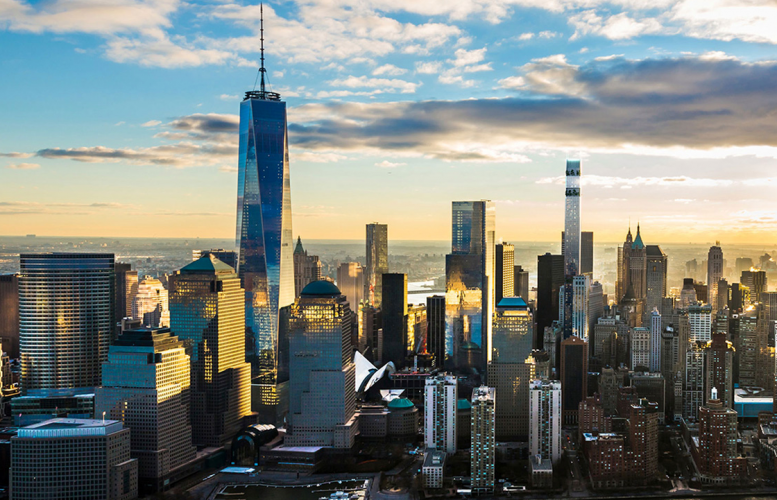 Last September, YIMBY revealed a new design for 125 Greenwich Street, a supertall planned for the corner of Thames and Greenwich Streets, just across from the new World Trade Center. Now, we have updated images of the project, which has seen significant modifications since those images were released; nevertheless, the Rafael Viñoly-designed building will still stand well over 1,000 feet in height, and is set to become Manhattan’s tallest residential tower south of 57th Street.

The last time we checked in on the site, preliminary work appeared to be getting underway, and a zoning diagram had been pasted to the fencing. Unfortunately, as with many high-profile projects, the current new building applications appear to be “dummy” filings that will be amended at a later date.

They list the tower at 841 feet tall, with a floor area of approximately 450,000 square feet. While the building’s overall floor area may be accurate, the height figures are likely intentionally misleading, a tactic that is becoming increasingly common among the city’s high-profile projects, like 217 West 57th Street.

When YIMBY posted the renderings last fall, they came with specific height figures listing the tower at 1,356 feet. It appears that the new images show a slight reduction in height, though it will certainly stand far taller than the 841 feet listed on the applications; the new design appears to be approximately 1,200 feet tall, which will still put it well ahead of any other residential tower below 57th Street. 125 Greenwich Street will upend the current rankings Downtown, where 30 Park Place now stands as the tallest residential building, at 937 feet. It’s followed by the soon-to-be 822-foot tall 111 Murray Street, and the currently under construction 56 Leonard, which will stand 821 feet to its pinnacle.

Despite the newness of all these buildings, other possible supertall contenders are also approaching the horizon of the Financial District’s development pipeline. 80 South Street was acquired by Howard Hughes, and rumors indicate that the project (which may or may not be designed by SHoP Architects) will easily surpass the 1,000-foot mark. Another site could sprout an even larger building at 40 Trinity Place, and that assemblage has over one million square feet of air rights. Besides modifications to the design’s height, it appears that the form of 125 Greenwich Street has also seen adjustments. The building now appears to include several outdoor terraces, with two formed out of the uppermost floors, and trees are also apparent in the renderings.

At 1,200 feet in height, the supertall will make a significant mark on the skyline, but its slender profile means its impact will be lessened, given proximity to the new World Trade Center. The enormous office towers along Greenwich Street will dwarf the residential buildings rising to the north and south, and even though projects further down the pipeline could potentially stand taller than any of the buildings that will eventually comprise the WTC, their girth will not match the office behemoths.

Bizzi & Partners, Vector Group, and Shvo are developing the site, and per on-site signage, completion of 125 Greenwich Street is expected by 2018.