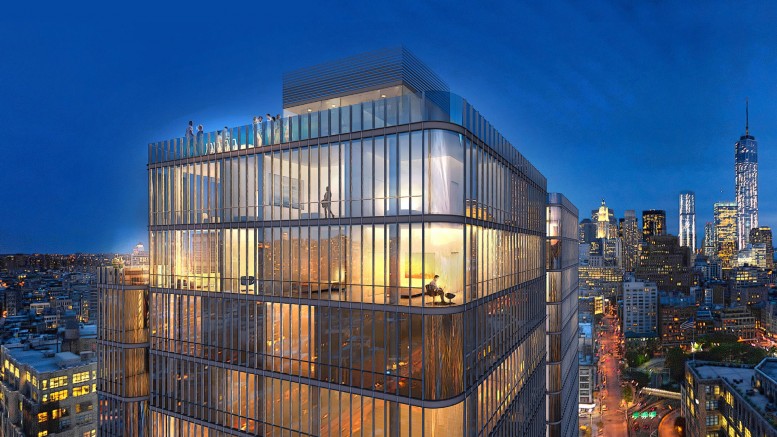 Back in March, YIMBY posted the first glimpse at the new condominium building coming to 555 Broome Street, in Hudson Square. Renzo Piano was recently revealed to be designing the project, formerly known as 100 Varick Street, which Bizzi & Partners, Itzhaki Aquisitions, and Michael Shvo are developing, and permits went up two weeks ago. Now, YIMBY has a new rendering of the building, giving a much better idea as to its ultimate appearance.

The structure appears to be a significant departure from Piano’s more angular work in New York City, like the New York Times Tower. Unfortunately Hudson Square is subject to arbitrary height limitations, partially due to the backlash against the 454-foot tall Trump Soho, which means that 555 Broome Street cannot stand more than 290 feet tall.

But nevertheless, the project should make a positive impact on the neighborhood skyline, which — besides the Trump Soho — is relatively short. The building’s facade will be characterized by wavy glass, with mullions spaced every few feet, adding a sense of texture. The structure will also have terraces near its roof, and the building’s mechanicals will also be sheathed in glass. An interior rendering of the project has also appeared, though it’s only in black and white.

Permits indicate the building’s residential portion will measure 242,350 square feet, which will be split between 119 condominiums, averaging over 2,000 square feet apiece. Importantly, the project will also include 17,134 square feet of ground-floor retail space, which will help enliven a neighborhood where needed foot-traffic is finally increasing.

The vicinity is booming with new development, and a similarly-sized building may also soon rise at 100 Vandam Street. Smaller projects in the area include the new Hotel Hugo at 525 Greenwich Street, residential buildings at 15 Renwick and 219 Hudson Street, and two more hotels at 2 Renwick and 261 Hudson Street.

A completion date for 555 Broome Street has not yet been released.