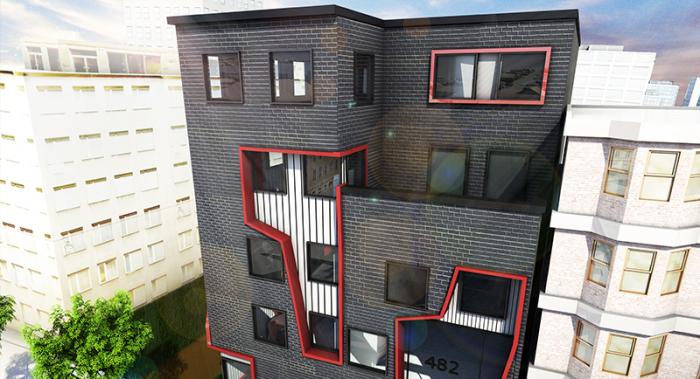 Over a year ago, WyckoffHeights.org got the first look at this unusual expansion for a two-story warehouse at 482 Seneca Avenue in Ridgewood. Now YIMBY has new renderings for the project, which will grow into a four-story apartment building.

Permits approved in January call for 20 apartments divided across 13,633 square feet of residential space, for an average, rental-sized unit of just 680 square feet. The revamped structure will stand 50 feet tall and include an upper mezzanine for the first floor apartments. The first two stories will hold four units each, and there will be six units a piece on the third and fourth floors. Overall, the building will double in size, growing from 6,175 to 13,633 square feet.

The developer is Williamsburg-based Moses Strulowitz, who purchased the warehouse for $1,070,000 in 2012. Charles Mallea is the architect of record.

Regardless of how you feel about the design, it will bring new housing to one of the city’s most affordable gentrifying hoods. We have little doubt that rents in this building will be cheaper than they are a few blocks south in Bushwick. And since the property is at the southern edge of Ridgewood, it sits about six blocks from the L at Dekalb Avenue and the M at Seneca Avenue.